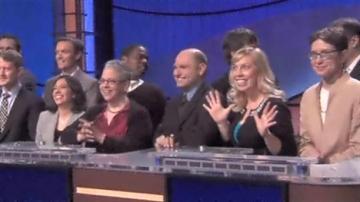 WEST ALLIS-CBS 58 News was there when back in 2006, West Allis Champion Michael Falk won the admiration of the entire cast and crew.

When we recently returned with Falk for the \"Battle of the Decades\" we were happy to see that nothing had changed.

\"He's just a decent human being,\" Host Alex Trebek told CBS 58's Michele McCormack. \"I'm sure you could say that about all our contestants but some stand out in that regard.\"

Although competing for the chance to win $1 million, the taping of the shows had more of a feeling of a family reunion.

\"It's something fun to look back on,\" add Falk. \"It's a conversation starter. I don't bring it up but people invariably do. And it's exciting for my family, my friends, and now that I'm a teacher, for my students.\"

Michael Falk appears in the \"Battle of the Decades\" Thursday April 3rd at 6 p.m. on CBS 58 Milwaukee.