"We're Best Friends Right?" Asked the Officer to the 2-Year-Old that Threw Him a Tea Party 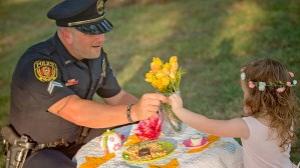 ROWLETT (CBSDFW.COM) – A 2-year-old from Texas invited a police officer to tea to thank him for saving her life.

It was a tea party invite Rowlett Corporal Patrick Ray couldn’t turn down.

He first met Bexley, 2, a year ago when she choked on a coin. His body camera was rolling as he worked to help her breath again.

“It was the most beautiful sound I’d ever heard in my entire life,” he said of the moment she gasped for air.

“This is a day that I will celebrate… because I have her,” she says.

Norvell hired a professional photographer to capture her daughter and her favorite police officer.

“Whenever I do ask my children ‘what do you want to pray for?’ Bexley always says, ‘Officer P Ray. Officer P Ray’,” says Norvell.

Bexley’s brother prays for him too.

“The night of the Dallas shooting, he asked if Officer P. Ray was okay. I wasn’t ready for that question from my 5-year-old.”

With so much negativity directed at police, Norvell hopes her photographs show how she sees them.

“I want people to have an image of the sweeter side,” she says.

Corporal Ray expects he will hear some teasing from his colleagues. “I’m sure I’m probably gonna get a tea set or something,” he says, but won’t mind one bit.

“We’re buddies,” he says. “I can watch her get married. I can watch her have a family. She could have lost her life that day, and I got super lucky.”