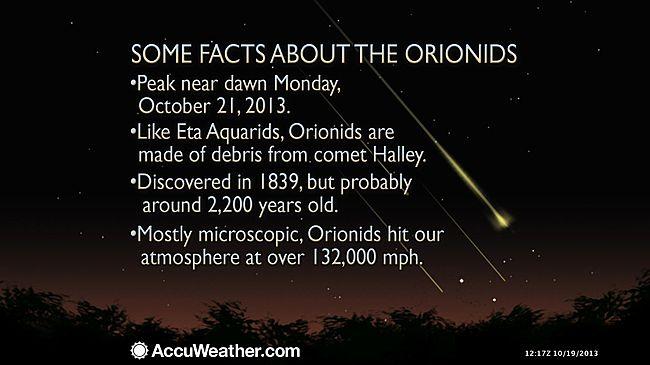 Clouds are going to keep southern and eastern Wisconsin star gazers from seeing the Orionid Meteor Shower tonight.  The shower peaks Tuesday morning, before sunrise.  Our First Alert Forecast does call for some clearer skies Tuesday night and Wednesday morning.

If you are interested, you can expect up to 20 meteors an hour even Wednesday morning.  Here are some tips: go outside 2 hours before sunrise amd away from artificial light, lay down and locate Orion's Belt and the star Sirius - this is the area that the Orionid's zip by at nearly 145,000 mph.

The Orionids are actually debris from Haley's comet circulating around the sun.  The Earth passes through or near this debris field every October.  Sightings of the Orionids go all the way back to 288 A.D.

If you would like to learn more Sky and Telescope has a nice article on the Orionids: http://www.skyandtelescope.com/astronomy-news/observing-news/orionid-meteor-shower-2014-10192014/.  You can also read more from NASA at http://science.nasa.gov/science-news/science-at-nasa/2014/17oct_orionids/