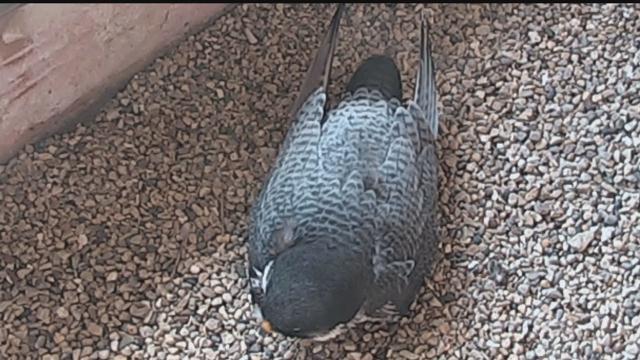 We were hoping for news that any or all of the four eggs had hatched atop the WE Energies Valley Power Plant.

Instead, Spokesperson Cathy Schulze announced the next best thing; a naming contest for the baby chicks once they're born.

You must say in 100 words or less, why you chose the name.

Judges are looking for something creative and descriptive of a falcon of if there is a story behind the name.

"They're know as the fastest animals on the planet," Schulze told viewers.

Also, it's very important that the name be gender neutral.

For more information on how to enter click here

WE Energies has  been assisting with peregrine falcon recovery since the early 1990s to help re-establish the raptor that had seen its population decimated during the 1960s.

Estimated nesting pairs in the U.S. dropped from thousands to just a few hundred. Though not the sole reason for the decline, the pesticide DDT, which passed through the food chain to the peregrines, weakened the shells of eggs, leading to the loss of many young before they could hatch.

With the curtailment of chemical pesticides and the success of nest boxes on our power plants and other locations, peregrine falcons are making an impressive recovery.

Since the beginning of our program, more than 200 peregrines have hatched at our nest boxes, which is about 20 percent of the total produced in Wisconsin.

You can watch the falcons during nesting season, typically March through July, checking hourly snapshots from various webcams.

WE Energies also provides live video of one of nest boxes when they have some eggs that are about ready to hatch.