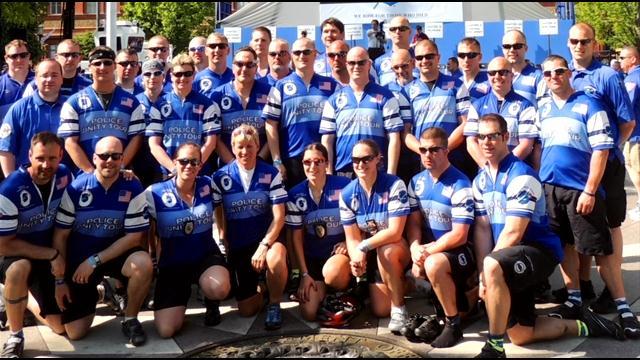 Three of the Wisconsin riders back home and talking after completing the Unity Tour to the National Law Enforcement Officers Memorial Wall.

They were the Monday focus of \"Our Stories with Michele\" a regular feature on the CBS 58 News at 4 p.m. which brings extra time to show viewers how people are coming together to bring about a better understanding of the place we call home.

\"It's very overwhelming to see the 1,900 police officers and survivors of fallen officers all wearing the blue jerseys on their bikes riding two by two all for their fallen loved ones and co-workers,\" recalled Sgt. Katie Gierach of the Wauwatosa Police Department.

Video taken of their 300 mile journey from New Jersey to the nation's capitol showed how fellow law enforcement on the ground and from above secured their safe passage and stopped traffic as they traveled to the wall.

They rode for their fallen colleague Jen Sebena who was fatally shot on patrol. It was a fight, though. At first national wall organizers resisted putting her name on the wall since her husband was the one who pulled the trigger.

\"She was a very good friend of mine and Katie Gierach, so we ride for her as long as we're able,\" shared Officer Tracy Burbach of the Wauwatosa Police Department.

They also rode for Deputy Arthur Herman who died in a motorcycle crash in Racine County 95 years ago, but was only recently placed on the memorial when the oversight was noticed and corrected.

Wisconsin's participation in the ride started just under a decade ago, with Matt Rohlinger and Eric Essigner of West Bend Police.

Since then, the participation has doubled to just under 30, raising more than $50 thousand of the $1.9 million to maintain the law enforcement memorial.

\"It's very powerful and overwhelming,\"  Sgt. Gierach told CBS 58 News. \"When you roll into the memorial and see all those names, your pain goes away because you know you brought your officers home.\"