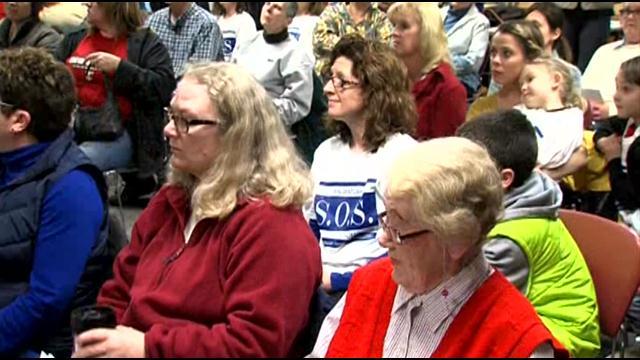 Governor Scott Walker may live in Wauwatosa, but that doesn't mean his neighbors are happy with all of his policies. Parents in Wauwatosa are expressing their outrage over what they consider to be unfair cuts to schools.

It was standing room only at tonight's town hall meeting as Wauwatosa residents lined up to tell Republican Rep. Dale Kooyenga the problems they have with Governor Scott Walker's budget.

They say Wauwatosa schools would stand to lose one million dollars from budget cuts, cuts they say the schools already can't afford.

The superintendent told parents if this budget goes through they stand to lose schools, AP classes and some optional classes like art and music and extracurriculars.

Representative Koonyega listened to their concerns , pen in hand. He says the budget isn't set in stone yet and says these concerns will be heard and will lead to changes.

\"Our current governor's two children when they were in school they were receiving a $250 per pupil increase each year. Our students deserve that,\" said parent Sarah Lerand.

\"Last time we had a budget, and we had town hall meetings like this and we listened and we made changes and I think they were happy with our changes last time. There's no doubt feedback we hear tonight will translate into change of public policy,\" said Rep. Koonyega.

The group leading the charge to change the budget in Tosa, SOS (Support our Schools), says they are not partisan. They just want all schools in Wisconsin to get the money they need to keep top notch education for all children.