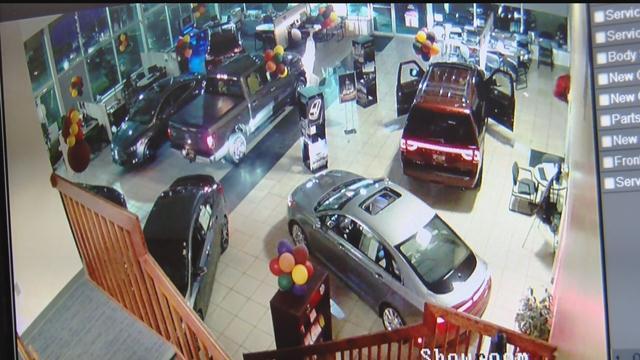 WAUWATOSA, Wis. (Oct. 28, 2015) -- Gutsy criminals steal a pick up truck from a dealership in Wauwatosa, and the crime is all caught on camera. Not only did the thieves get away with the truck, they left behind a trail of damage. The bad guys, dressed in all black, peeled out of the Uptown Ford Lincoln showroom early Wednesday morning and drove right through the glass.

"Did a lot of dmaage to the dealership, real frustrating," said John Pentler, General Manager of Uptown Ford Lincoln.

Pentler says the three guys came in around 3:40 a.m. by busting another glass window. The surveillance video shows them browsing for a little while before disappearing off camera for a few minutes. A few minutes later, the gutsy guys reappeared, hopped in the truck and drove right through the door.

"They were only in here a few minutes, it was a quick thing and ended up getting the vehicle," Pentler added.

Wauwatosa police say the truck was found in Milwaukee Wednesday afternoon, and investigators think it may have been used in a burglary in Milwaukee before it was left. Around 5 a.m, five young people broke in to a dealership here in West Allis. Police believe they drove off with a pre-owned Honda CRV and Toyota RAV4.

So, as Wauwatosa police investigate the theft from Uptown Ford Lincoln, they're working with Milwaukee, West Allis and Glendale on the other dealership thefts.

"You feel a little violated that people come in and break in and can do something like this," Pentler said. "That just seems very outlandish when you think about it."

Integrity Auto in Milwaukee had six cars stolen early Saturday morning. An owner told CBS 58 over the phone that four have been recovered, one car was in a crash and a sixth one is still missing. That car is described as a silver 2004 Infiniti G35 four door sedan. They say it has black leather interior with 123,000 miles. If you have information, give police a call.