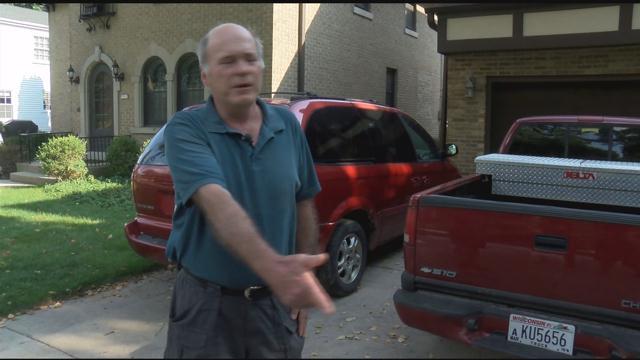 Alderman John Dubinski knew it was strange when he heard voices in his driveway, so he peeked through the dark windows

Several teens surrounding Dubinski's two vans, a couple were inside, while others acted as lookouts.

Dubinski, armed with a career as a former Wauwatosa Police Detective and a gun. Dubinski thought quickly about confronting the teens until he saw that he wasn't the only one packing.

\"It was like he was almost in a ready position where he could have seen me if I came out the front door, and anybody who was coming up the street he'd see.\"

\"By the time I came back to the window, there was a squad pulling up.\"

The teens ran, two girls were quickly caught while three guys hid in a nearby neighbor’s unlocked van. The youngest suspect is only 12-years-old. The oldest is 17. The ages alarm Wauwatosa Lieutenant Brian Zalewski.

\"Not sure why they were in the street in the middle of the night with a loaded hand gun, but it is concerning when you see the ages of individuals involved,\" Zalewski said.

Dubinski worries about their future, \"it's just going to be a tragedy for them one day where they're going to end up in prison for hurting the wrong person or something bad is going to happen to them.\"

Even more concerning, Dubinski's van was passed down by his father who recently passed. It had a special lift for his disabled daughter and this morning it was too damaged to start.

\"Because of her disability she doesn't understand what's going on and she doesn't really appreciate change like this, so she doesn't know why her vans not here.\"

Police say the teens drove to the alderman's home in another stolen vehicle. They now face several charges, including underage carrying of a loaded weapon.