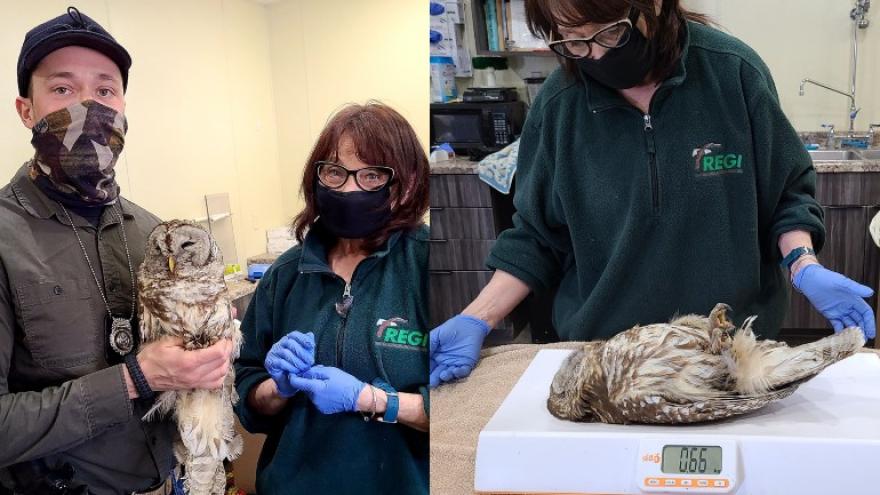 ANTIGO, Wis. (CBS 58) -- An owl struck by a car in Waupaca County, is now on the mend and wildlife officials are optimistic for her recovery.

The owl is being cared for at Raptor Education Group, Inc. (REGI) in Antigo, where she is looking much better than when she first arrived, the Waupaca County Sheriff's Office says.

She is alert and her eyes are open. For now, the owl is being tube fed.

REGI staff says they are optimistic for her recovery.

SCANDINAVIA, Wis. (CBS 58) -- A Waupaca County deputy rescued an injured owl that was hit by a car with the help of the Wisconsin Department of Natural Resources on Monday, March 8.

The Waupaca County Sheriff's Office said they received a call of an owl that was struck by a vehicle near an address outside of Scandinavia.

Deputy Lange responded to the location and discovered the owl was unable to fly away and appeared injured, according to officials.

The DNR will care for the bird until it gets transported to a rehabilitation facility.

The Waupaca County Sheriff's Office said barred owls are native to the area and are predominantly nocturnal.

"They can grow to 20 inches tall and are famous for their maniacal laughing and 'who cooks for you, who cooks for you all' calls," The Waupaca County Sheriff's Office said on Facebook.

On the evening of March 8, 2021, our communication center received a call of an owl that was struck by a vehicle near an...