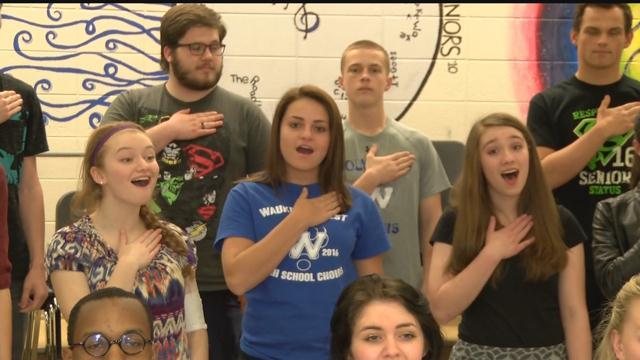 A rock band with a long history of hits needs a little help for its upcoming concert at this summer's Waukesha County Fair.

They have sent out an "urgent" call for young singers who'd like to be "juke box heroes" and sing along with Foreigner.

A group of students here is trying out for this opportunity which basically would have them as backing vocals for the show closer and this group even has a little experience.

These Waukesha West students say the concepts in Foreigner's music isn’t really that foreign to them.

"The choir that's going to enter the competition is going to be our jazz choir which is mostly juniors and seniors and some sophomores."

But ask the average student and they won't be too impressed.

But some choir students say the audition open for submissions on Facebook.

This is reclaimed nostalgia for senior Paij Lanza.

Lanza took the stage with choir member last year when Foreigner played after an Admirals game. They provided back up for 'I want to know what love is'.

She said there's definite value performing with what some people dismiss as just an 80s band.

"When we have our school choir perform and we have our own concerts there's a certain expectation of how the crowd will react. Just the kind of environment is different vs. being on the stage with Foreigner – there is people screaming, hundreds or thousands of people that were screaming and listening and hanging on every word. It's really kind of a bigger window," said Lanza.

Foreigner performs at the Waukesha County fair on Friday, July 22.

Submissions through Facebook will only be accepted until the 28th.