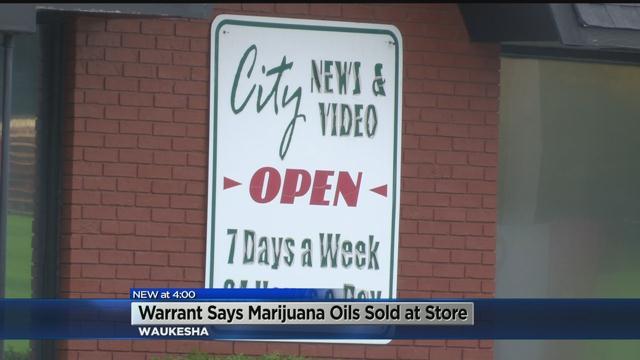 An adult video store in Waukesha is accused of selling marijuana oil to it's customers.

City News and Video sold to an undercover officer, twice.

The adult video store refused to speak with CBS 58 about the search warrant Waukesha County Sheriff's detectives delivered on Friday.

The self described "head shop" is accused of dealing drugs.

If charged, they could be facing charges for:

While a law passed in 2014 legalized the oil in Wisconsin, it is intended for medical uses only. A healthcare provider must be approved by the FDA to prescribe it.

An undercover officer purchased a vile of CBD oil from the video store in May 17, 2016 and again on October 13, 2016. A search warrant was issued the following day.

On May 17, the undercover officer "asked the clerk if they had any CBD. The clerk walked [the detective] to a glass where she pointed to several types."

The detective "picked out a small vial labeled as 'Hemp Hookahzz,' containing 40 mg. of CBD."

The warrant states the detective paid 21.01 including tax for the vial.

In August, the results from the vial were returned from the Wisconsin State Crime Lab. The vial tested positive for the presence of Cannabinoid.

When the detective returned to the store on October 13, he "asked the clerk if they sold CBD. The clerk then stated that they did and then showed [the detective] a display of different CBD oils that were located behind the front desk."

The detective purchased two vials. A specialist on scene tested the vials. The vials tested positive for tetrahydrocannabinol.

The sheriff's department has not yet asked the Waukesha district attorney to file charges.