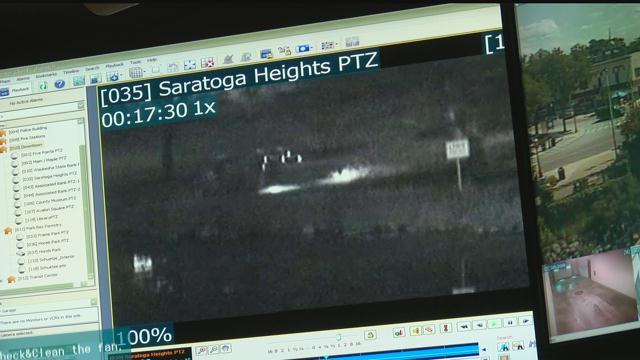 "The OptiCop system has been very valuable to our department and the officers. Just a few nights ago officers were engaged in the pursuit of the subject who they believed had committed a felony the officers were able to back off that pursuit, and dispatch was able to use the OptiCop cameras to follow the vehicle through the downtown area at a safe distance obviously, and the vehicle eventually crashed, and the suspect eventually jumped into the Fox River. While he was in the river, the OptiCop camera was also invaluable. We could turn the camera, tilt it, and zoom it into the exact location, and that video was able to capture his arrest and when he was taken in," said Lt. Kevin Rice with the Waukesha Police Department.

More on that story here: http://www.cbs58.com/story/32124370/naked-man-leads-waukesha-police-on-chase-ending-in-fox-river

Police have more than a dozen cameras in the city. After getting a grant for the OptiCop system almost ten years ago, they have since upgraded the cameras and added more.

"The OptiCop system is monitored in real time through our Waukesha Police dispatch center, and our dispatchers have the unique opportunity to view those incidents as they occur and dipatch officers to the scene in real time," said Rice.

During the June 1st incident, officers did not have to take part in a dangerous chase with the suspect. Dispatchers watched the car through the OptiCop cameras, and police followed a safe distance away.

For a decade Waukesha Police and their dispatch center have worked together using these cameras. Last year OptiCop helped with a homicide case.

"We were able to use that video to identify a homicide suspect which led to his arrest and trial," said Rice.

The cameras have helped police in ways that may not have been possible without the video.

"We've used the OptiCop system for almost 10 years now and it's proved to be a valuable asset. It's captured crimes in progress that weren't normally called in, but our communication center dispatchers were able to view those incidents in real time and dispatch officers to the exact location while observing the incident," said Rice.