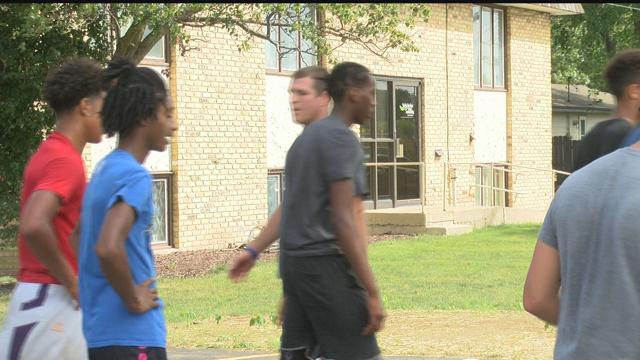 CBS 58— A Waukesha church youth group is working to build relationships with the community and police.

Epic Student Ministries was the site of a fight back in April. Five teens were cited for disorderly conduct. Since then, the youth group’s leaders increased safety measures, and this week they hosted a youth basketball tournament.

The winning team got to take on Waukesha Police officers in a game of three-on-three, but organizers say it was about more than basketball.

“We just were trying to think of ways that we could be a solution to cultural problems, even in just a small way,” said Tyler Wolfe, the Epic Student Ministries pastor.

On the court, it was cops versus kids, but the hope is the bonding over basketball can get everyone on the same team, on the street.

“It gives us something to work off of, definitely, and it can show lots of other kids that police are ok, not something to be afraid of,” said 15-year-old Josiah Bailey, who played against the officers.

“We're regular people and we like to do things that they do and we want them to know that we're friends not enemies,” said Officer Roosevelt Mullins, who played on the police team.

Josiah says he hopes other kids, even if they didn't play, can take something away from this game

“They should definitely be thankful for the people that are out here protecting us,” Josiah said.

The teens were pretty happy to sink the winning shot, though nobody left feeling like they lost.

“I know if I see one of these officers, I'm gonna say, 'Hey, remember when we beat you?' have some laughs,” Josiah said.

Though the teens got the bragging rights, officers got a consolation prize including a basketball signed by the kids, coffee and doughnuts.

Both teams say they hope this becomes an annual event.