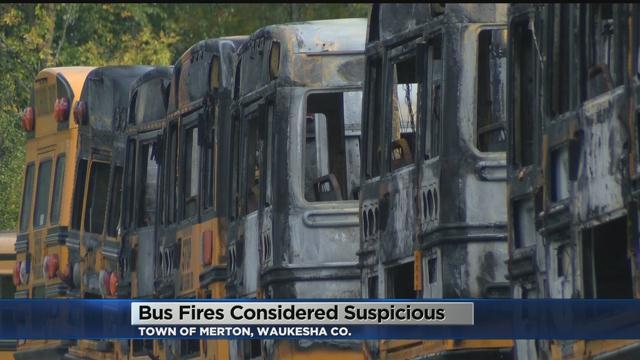 A massive fire at a Waukesha County bus depot is now being called 'suspicious' by investigators.

The fire started Sunday afternoon and destroyed 34 buses and a garage before firefighters could put it out. The clean-up at Dousman Transportation Company continued on Monday.

"You walked outside and from a mile away - a think even farther away - you could see the smoke billowing up here," witness to the fire John McBroom said.

"It started getting blacker and blacker and then, all of a sudden, I started hearing the explosions," neighbor William Hupe said.

"You know, as we stood along the trail and we could watch the engines coming in - it would be like a Vietnam or someplace where they'd be doing bombing. I mean, it just tremored terribly," neighbor Barbara Hupe said.

Neighbors said they are convinced someone started the fire intentionally. They said there has been a recent rash of break-in and vandalism in the area and they feel this could be connected.

"The neighbor's been telling us so we've been starting to lock up everything. normally here nobody locks their doors," William Hupe said.

"It's just incredible. I just can't believe the damage. I can't believe this could have accidentally started. I've got a feeling that probably somebody started it. I hope they can find that out if that's the case," McBroom said.

Dousman Transport has already brought replacement buses into the area. All student expecting to get picked-up this morning did get picked-up, district officials said.