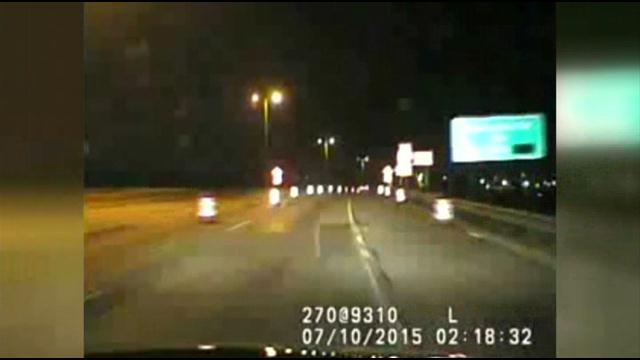 Though the chase wasn't very long, dash cam video shows just how dangerous it was as the Waukesha County Sheriff Deputies followed a getaway car into Brookfield.

It looks like a scene from a movie. Dash cam video shows authorities racing down I-94 at nearly 120 MPH, weaving in between cars with just one lane of traffic open.

It all started at the Pewaukee Holiday Inn around 2 AM Friday morning. The Waukesha County Sheriff's Office says two men carjacked a rental car that was parked there, while an accomplice stood by in another vehicle.

\"I was approaching the front door approached by 2 black males,\" is something you can hear as you listen to the dash cam.

The two men drove off in the stolen car ,reportedly a Chevy Cruze and so did the accomplice vehicle, but police quickly spotted it on I-94.

In the dash cam video you can hear authorities say that the other suspect's vehicle was a gold or silver Kia Optima, traveling eastbound.

It crashed near Highway 100; in the video you can see the suspect get out of the car and run, apparently jumping over the freeway barrier wall.

Deputies believe he was armed.

As you can see multiple law enforcement agencies joined in on the search as well as K-9 units.

The accomplice and the two men in the stolen vehicle are all still at large. All three described as black males in their late teens or early 20s. You're urged to call authorities if you know anything about this incident.