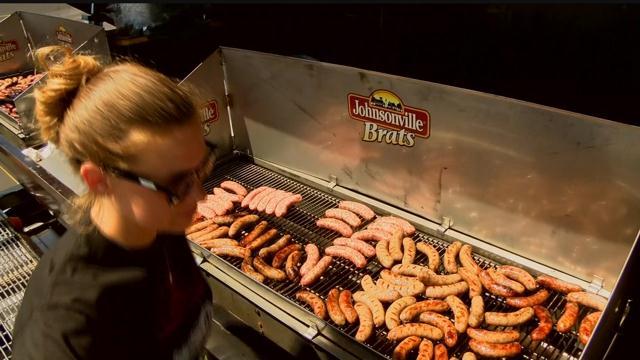 A big 'grill-out' event in Watertown welcomed a group of employees back to the job on Tuesday after a fire destroyed their factory about one year ago.

The facility processes meat for Johnsonville sausages and during the entire downtime that company decided to keep paying wages to all of their employees.

About 120 of those employees and their families met outside of the new factory to celebrate the re-opening of Perry Way Foods - a subsidiary of Johnsonville Sausage.

Many of the workers tell CBS 58 News that they won't forget what lead to this moment following that giant fire in May of 2015.

"Pulled over the hill coming to work in the morning on the Monday ater Mother's Day. I seen all the emergency vehicles there and my heart went right down to my feet and it was like 'what is going on?'" employee John Kaliebe said.

"I was very nervous. We didn't know if we were going to have a job to come to. And that was one of my fears," Viedma said.

Johnsonville owner Ralph Stayer addressed the crowd in front of the factory his company decided to rebuild. Workers, however, did not have time off during the construction.

"It's unheard of. I've never heard about it. And after we were told we were going to be paid our 40 hours a week, you know, it's like how long is this going to last. Are we going to have to go onto unemployment? What's going to happen to us. But all of a sudden the decision was made that 'No, we will continue getting paid until the duration of time until the new facility opened up'," Kaliebe said.

"And they also had a bilingual course for the Spanish speaking members and a lot of members took advantage of that and it's very nice to see," Viedma said.

"This might be a factory but we're all family here. And it's awesome to come back to work and be a part of that," Viedma said.

Employees at Perry Way Foods completed about 10,000 hours of volunteer work and about as much college coursework during construction, according to a press release.

Perry Way Foods is also planning to add dozens more jobs to this facility in the near future.