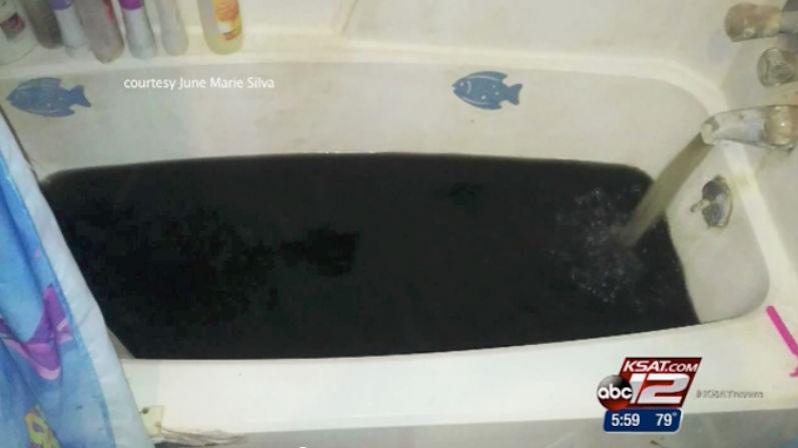 (CNN) Dirty water and allegations of dirty officials have wracked a small south Texas town that calls itself "The Spinach Capital of the World."

Black, stinky water unexpectedly flowed from faucets in a Crystal City on Wednesday.

"It looked like black sludge. They were comparing it to oil -- that dark," resident Nora Flores-Guerrero told CNN affiliate KSAT.

"We didn't get a proper warning. They didn't post anything or send out any type of message to warn the residents. It was pretty scary."

The city said the problem occurred when the city's elevated water tank was drained for the first time in decades and built-up sediment in the bottom of the tank got into the water.

In a move reminiscent of the water crisis in Flint, Michigan, the Texas Commission on Environment Quality (TCEQ) trucked in loads of bottled water.

Is the water safe now? That depends on who you ask.

Carlos Ramierez, the city's water superintendent on the job less than a year, told CNN that the TCEQ declared the water safe for drinking Saturday morning.

"While the most recent samples testing for water pressure, chlorination, and bacteria have come back in the acceptable range, we would like to wait until we have the complete suite of sample results back until we can give the all-clear," she said. "We may have these as soon as Tuesday. In the meantime, we would still urge residents not to drink discolored water, and to boil city water before drinking it."

When asked about the city's assertion that TCEQ told them the water was safe as of this morning, Morrow said the city conducted its own sampling and those results came back negative.

Distrust was already running deep in Crystal City, a municipality of about 7,500 people located 115 miles southwest of San Antonio.

Earlier this month, the FBI arrested most of the top city officials month on charges of allegedly taking bribes and kickbacks.

"Today the FBI with out state and local partners was able to liberate Crystal City from the grasp of public corruption," FBI Special Agent in Charge Chris Combs said at a February 4 press conference.

The status of those charges was not clear Saturday.

Joel Barajas is the only council member not under indictment.

The indictments left a leadership void in city hall. Imelda Allen, superintendent of the Crystal City Independent School District, told KSAT she learned of the water problem Wednesday night while visiting a relative -- not from city officials.

She didn't consult with city hall before deciding to release all students early on Thursday.

"Right now, there's not really anyone in charge to oversee and to make people aware of the condition of the water," she said. "So I wasn't going to wait for anyone to call me from City Hall. I know that leadership is not present at the time."

'We had to clean their mess'
The city said the problem started Wednesday when the elevated water tank was drained and flushed.

"This, in effect, caused all sediments and deposits sitting on lower portion of tank to run through distribution lines," a press release release said.

"When we were draining the tanks, we didn't know what was inside," Ramirez, the water superintendent, told CNN on Saturday. "The previous operator was here 25 years, I've been on the job eight, nine months. It hadn't been cleaned in 20-25 years."

"The previous administrations neglected it. Just neglect on the city's part. We had to clean their mess."

Another Flint?
The fear is that Crystal City could be another Flint, Michigan.

Back in April 2014, the Michigan city's then-Mayor Dayne Walling and other municipal officials drank water from the Flint River -- the waterway with a nasty local reputation for cleanliness where Flint's water would be switched to, away from Lake Huron, in a temporary cost-cutting move -- to show they thought it was safe to drink.

About a month later, after the switch, Flint residents began noticing their tap water looked, smelled and tasted bad. Detroit offered to waive fees to let Flint back to its water system in January 2015, only to be turned down by then-Flint Emergency Manager Jerry Ambrose, who cited budgetary reasons.

So the water from the Flint River kept flowing into residents' homes, with city and state officials' blessings. It kept coming after an internal EPA memo leaked in July showed high lead levels in one woman's home, and her son got lead poisoning.

By then, damage was already done to pipes around Flint, meaning the water there still wasn't safe to drink. That continues to the case months later, with officials estimating it will cost tens if not hundreds of millions of dollars to permanently address the issue.