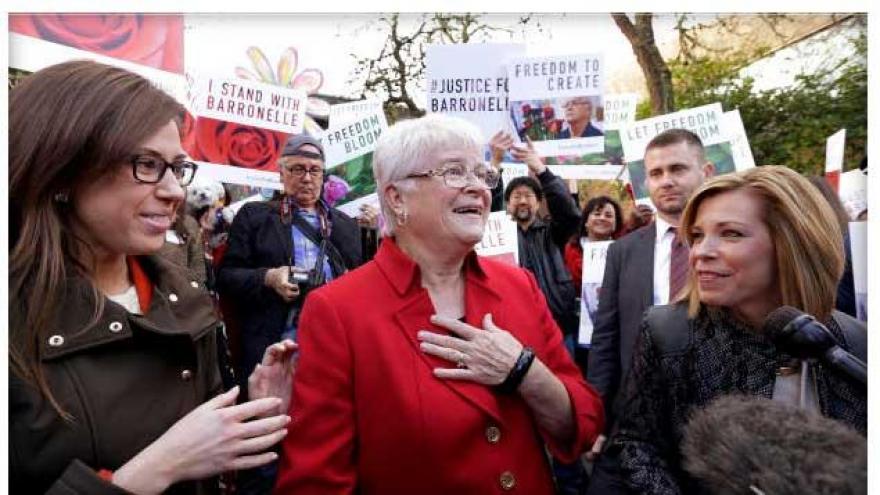 OLYMPIA, Wash. (CBS NEWS) -- The Washington Supreme Court ruled unanimously Thursday that a florist who refused to provide services for a same-sex wedding broke the state’s anti-discrimination law, even though she claimed doing so would violate her religious beliefs.

Barronelle Stutzman, a florist in Richland, Washington, had been fined by a lower court for denying service to a gay couple in 2013. Stutzman said she was exercising her First Amendment rights.

But the court held that her floral arrangements do not constitute protected free speech, and that providing flowers to a same-sex wedding would not serve as an endorsement of same-sex marriage.

Stutzman’s lawyers immediately said they would ask the U.S. Supreme Court to overturn the decision.

“It’s wrong for the state to force any citizen to support a particular view about marriage or anything else against their will,” Stutzman’s attorney, Kristen Waggoner, wrote in a statement issued after the ruling. “Freedom of speech and religion aren’t subject to the whim of a majority; they are constitutional guarantees.”

It’s one of several lawsuits around the country - including some involving bakers - about whether businesses can refuse to provide services over causes they disagree with, or whether they must serve everyone equally.

A Colorado case involving a baker who would not make a wedding cake for a same-sex couple is pending before the U.S. Supreme Court, according to Lambda Legal. In 2014, the court declined to hear an appeal of a case out of New Mexico that went against a photographer who denied a same-sex couple service.

Gov. Jay Inslee lauded Thursday’s ruling, saying it was “in favor of equality for all Washingtonians.”

“By ruling that intolerance based on sexual orientation is unlawful, the Court affirmed that Washington state will remain a place where no one can be discriminated against because of who they love,” Inslee said in a written statement.

Stutzman had previously sold the couple flowers and knew they were gay. However, Stutzman told them that she couldn’t provide flowers for their wedding because same-sex marriage was incompatible with her Christian beliefs.

The court rejected several arguments put forth by Stutzman, including the assertion that since other florists were willing to serve the couple, no harm occurred.

“As every other court to address the question has concluded, public accommodations laws do not simply guarantee access to goods or services. Instead, they serve a broader societal purpose: eradicating barriers to the equal treatment of all citizens in the commercial marketplace,” the court wrote. “Were we to carve out a patchwork of exceptions for ostensibly justified discrimination, that purpose would be fatally undermined.”

The case thrust the great-grandmother into the national spotlight and she testified before state lawmakers in Indiana and Kansas.

Michael Scott, a Seattle attorney who worked with the American Civil Liberties Union to represent Robert Ingersoll and Curt Freed - the couple denied the flowers - had previously told justices he didn’t believe Stutzman’s floral creations constituted speech. By providing flowers for a same-sex marriage, he argued, “she’s not endorsing same-sex marriage. She’s selling what she sells.”

Ferguson had said the state’s argument rested on longstanding principle, and uprooting it would weaken anti-discrimination law.

After the arguments in the Supreme Court case last November, at a packed theater at Bellevue College, a large crowd of Stutzman’s supporters greeted her outside, chanting her name and waving signs with pictures of roses that said “Justice For Barronelle.”

In a February 2015 ruling, Benton County Superior Court Judge Alexander Ekstrom found that Stutzman’s refusal to provide flowers because of sexual orientation violated Washington’s anti-discrimination and consumer protection laws. She has been fined $1,000, plus $1 in court costs and fees.

Stutzman entered the florist business 30 years ago, when her mother bought a flower shop and she started as a delivery person.