Washington D.C. is sinking into the ocean 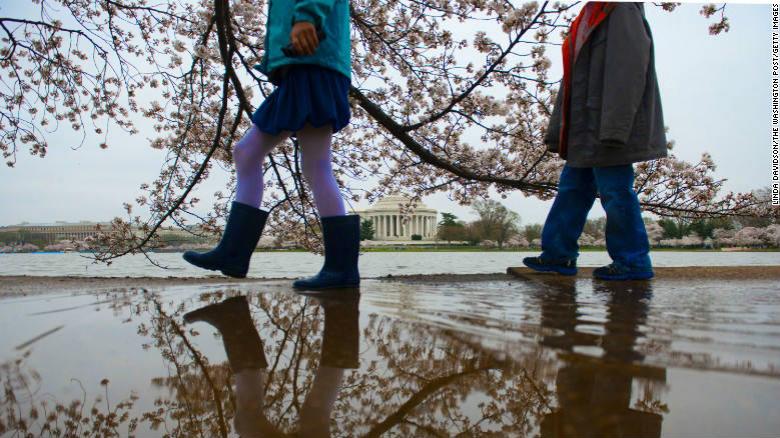 (CNN) -- Washington, D.C., where the powers that reign over the United States reside, is sinking into the ocean.

Scientists predict that the land underneath the nation's capital will drop more than 6 inches in the next 100 years, according to new research from the University of Vermont and the U.S. Geological Survey (USGS).

Surprisingly though, Washington's sinking land is an entirely independent phenomenon from the rising sea levels, which scientists have attributed to climate change in the past.

For this study, researchers examined the Blackwater National Wildlife Refuge, one of the most rapidly subsiding and lowest-elevation surfaces, which borders the Chesapeake Bay.

The area is going through what geologists call a \"forebulge collapse,\" also known as the reason for many of Washington's foreseeable geological woes. During the last ice age, a mile-high ice sheet pushed the land under the Chesapeake Bay region up. When the ice sheet melted 20,000 years ago, the bulging land began to settle back down.

\"It's a bit like sitting on one side of a water bed filled with very thick honey... when you stand, the bulge comes down again,\" said former USGS geologist Ben DeJong, one of the lead authors on the study, who conducted the research at University of Vermont's Rubenstein School of Environment and Natural Resources.

Researchers also built a 3-D portrait of the area's post-glacial geological periods, which stretched back millions of years, and are confident of their model of the Chesapeake Bay region. Based on the data, researchers believe that the area is at an early stage of gradual sinking, a process that may last for many thousands of years.

DeJong urged that now is the time to start making preparations. \"Six inches does not sound like much, but when you're in a landscape like the Blackwater National Wildlife Refuge, that's a lot of sea level rise,\" he said in an interview with CNN. \"I have worked alongside private land owners who have had family farms in the area for years and they are the first to tell you they are losing land.\"

The release of this report, which was published in the journal Geological Society of America this week, comes after many Republican elected officials have expressed skepticism about climate science. Some 2016 GOP presidential candidates, like Florida Sen. Marco Rubio and Texas Sen. Ted Cruz , have been vocal about their doubts that climate change is caused by humans and have questioned whether the phenomenon is real.

University of Vermont geologist Paul Bierman was critical of some Washington politicians' stances on climate change in a publication that was released along with the report.

\"It's ironic that the nation's capital -- the place least responsive to the dangers of climate change -- is sitting in one of the worst spots it could be in terms of this land subsidence,\" he said. \"Will the Congress just sit there with their feet getting ever wetter? What's next, forebulge denial?\"

DeJong said it's frustrating to hear some politicians express doubts about climate change, but he's confident in the data on the sinking of the nation's capital. \"The beauty of the science I work with is that it is all quantified work. It's data. You don't have to believe it or not. You can look it up and the data tells you the story.\"

The sinking of Washington is happening in conjunction with sea levels rising in the Chesapeake Bay region. USGS reports that the water levels in the bay are rising faster than any other location on the Atlantic coast, which are rising at twice the rate as the global average.

The rise of sea levels in the region could be attributed to climate change and the melting of glacial ice, according to the report.

Global sea levels have risen about 8 inches since reliable record keeping started in 1880, research from institutions such as National Climatic Data Center and NASA Jet Propulsion Laboratory have reported. Those sea levels are projected to keep rising another 1 to 4 feet by 2100.