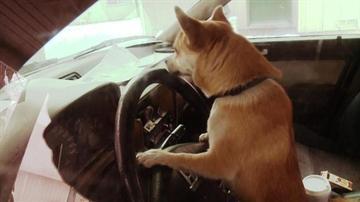 SPOKANE, Wash. -- The damage to a Wash. woman's car may have been minimal when it was hit at a red light, but the shock value certainly wasn't when she realized who was behind the wheel, reports CBS-affiliate station KREM.

At first, Tabitha Ormaechea could not see anyone inside the car that had seemingly come out of nowhere and bumped into her tire.

“When I looked up, there was no one in the car, just a little dog up on the steering wheel peeking over looking at me,” said Ormaechea.

“I was shocked, I didn't know if I was crazy, or if this little dog had taken a joy ride,” said Ormaechea.

And that's exactly what happened.

“I didn't know what to think. Someone just ran into the store and asked if anyone has a gold car and I said, 'Yeah, me why,'” said dog owner Jason Martinez.

Martinez said he had been in the store for just minutes when his Chihuahua Toby caused the scene.

“He must have knocked it out of gear and the car rolled out,” said Martinez.

Thankfully, no one was hurt. However, Martinez said Toby’s license has been revoked.