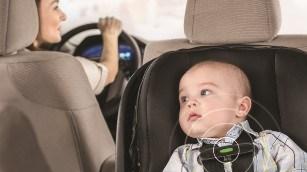 (CNN)Walmart and Evenflo announced this week a new infant car seat with technology designed to remind drivers of their backseat passengers, and stop children from dying in hot cars.

In most new cars, an alert sounds if a driver or passenger is not wearing a seat belt or if headlights are left on. Using a similar idea, a sensor on the infant seat harness triggers a series of tones if a child is still buckled in when the ignition is switched off. The feature is meant to remind drivers who might forget that a child is in the vehicle.

On average, 38 children die every year as a result of being trapped in hot cars. In about half the cases, children are forgotten in the back seat, according to the nonprofit KidsAndCars.org. Often, a parent has forgotten to drop a child off at daycare.

The Evenflo Advanced Embrace with SensorSafe infant car seat retails for about $150, which is comparable to other popular infant car seats on the market. It has a wireless receiver that plugs into a car's on-board diagnostic port and syncs with the chest clip that goes around the baby. It does not require the use of Bluetooth, cellular or other devices, the companies said.

Research and testing was done on the sound, to make sure it wasn't too similar to existing car sounds, or popular smart phone ring tones, said Sarah McKinney, Walmart's director of corporate communications.

The car seat will be available exclusively at Walmart for one year. It's available now on Walmart.com and will be in stores mid-August. The new car seat is part of an expansion in Walmart's baby department, adding about 20 new brands in the past two years, McKinney said.

As recently as last year, David Friedman, the acting administrator of the National Transportation Highway Safety Administration, warned that the technology to protect children and adults from heatstroke \"just doesn't seem to be there yet.\" Janette E. Fennell, founder and president of KidsAndCars.org, said she has a list of hundreds of products invented by well-meaning people to prevent children from dying in a hot car, and the new Evenflo car seat is the most promising development so far. Her organization has been pushing for driver reminder systems to reduce deaths.

Should the government step in to prevent hot car deaths?

\"This is the first time where I can say with a great deal of confidence that there is something that works, and you've got some big companies behind it, and it will save lives,\" Fennell said. \"Because it's been crash tested, I have a high degree of faith that it will work, and you don't have to do anything extra. ... it's literally getting it set up one time and then every time you put the baby in, of course you're going to close the chest clip and then it's activated.\"