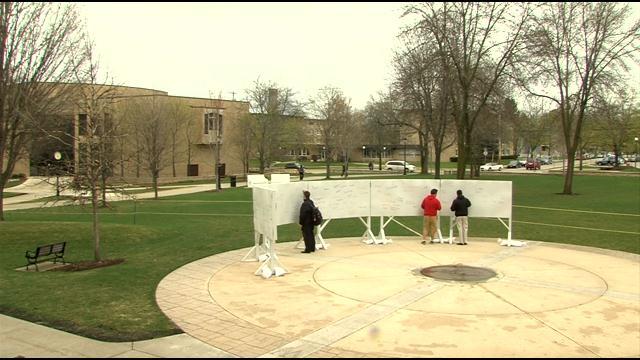 It's ironic, but a wall put up on the Waukesha campus of Carroll University is actually bringing people together instead of separating them.

It's a simple concept to help students brainstorm through the difficult topics of stereotypes and prejudice.

The project has been going on for three years now.

Originally a wall where students were allowed to write hateful things that were said to them or they might have said themselves.

It also includes another side, where the same students use words to combat the hate speech with positive messages.

\"It's a dualistic approach to confronting prejudice and how to combat it,\" explained Nicholas Damron, President, Pi Lamda Phi. \"People don't talk about it. It's sheltered. Prejudices are in their heads.\"

Organizers say many times the students don't even realize the thoughts they have brought to campus are stereotypes until they see it written on the wall and become the topic of conversation in a safe environment.

The wall is outside the Main Hall on the campus. More and more students are anxious to write their positive message and hope to reach someone who might be impacted in a major and negative way by some hateful exchange with a fellow student.

\"I just want them not take these negative things to heart and work on being a lot more positive,\" explained Rachel Seles, a Carroll University Sophomore.  But she admits one thing she came to realized by taking part in the project; \"It's a lot easier writing positives for others than sometimes it is to do it for yourself.\"