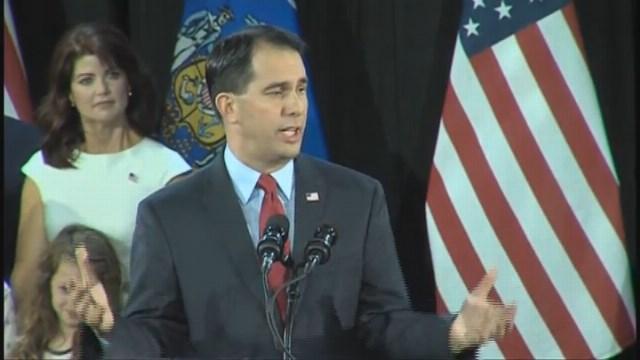 WASHINGTON (CNN) -- It is hard to deny that Scott Walker has some serious momentum going for him as the 2016 Republican presidential primary fight starts to heat up -- with one year to go until the first in the nation Iowa caucuses.

The Wisconsin governor has surged to the head of the GOP pack in the Hawkeye State, according to a fresh Des Moines Register/Bloomberg Politics poll released over the weekend. Walker gets the support of 15 percent of likely Republican caucusgoers, edging out Rand Paul at 14 percent, Mitt Romney at 13 percent, Mike Huckabee at 10 percent, Ben Carson at nine percent and Jeb Bush at 8 percent, though all within the polls 4.9 percentage point margin of error.

Romney announced Friday that he would not pursue a third bid for the presidency. With the 2012 GOP nominee out of the equation Walker still leads with 16 percent, followed by Paul at 15 percent and Huckabee at 13 percent.

The survey also showed Walker ranking third when Iowa Republicans were asked if a candidate is too conservative, too moderate or about right in terms of ideology. Fifty-six percent of respondents said Walker's ideology was \"about right,\" with seven percent saying he was \"too conservative\" and just three percent calling him \"too moderate.\"

Walker recently said he sees \"gaps\" in the GOP field and the Register's findings suggest he could be primed to fill them.

On one side you have the establishment candidates favored by the business class of Republicans -- Bush and Christie. But social conservatives and tea party supporters remain wary of them. Among Iowa Republicans 46 percent say Christie is \"too moderate\" while 37 percent say the same about Bush.

More conservative Republicans would instead prefer a candidate more along the lines of Huckabee, Rick Santorum or Ted Cruz. But mainstream Republicans have doubts about their electability in a general election campaign. In the Register poll Huckabee and Santorum are seen as \"too conservative\" by 23 percent of Iowa Republicans, with 20 percent rating Cruz that way.

Walker is betting he can shoot the gap by appealing to both wings of the GOP. It's a formula that has worked for him in Wisconsin, says Charles Franklin, the director of the Marquette Law School poll.

That view of Walker's possible reach is shared by others. \"He has a strong reputation with the grassroots activists while still holding the credentials of somebody who has great potential as a national candidate,\" says Kevin Madden, who served as a senior adviser to Romney's 2012 campaign.

As the two-term governor of a state that hasn't voted for a Republican presidential candidate since 1984, Walker has a marketable story to tell. He's the son of a former Baptist preacher and an Eagle Scout who came into office in 2011 and pushed to eliminate collective bargaining rights for public employee workers.

That decision angered progressives, especially labor unions, spawning large protests at the Wisconsin State Capitol in Madison. But the move endeared Walker to Republicans in Wisconsin and across the country, who helped him become the first governor in U.S. history to survive a recall in 2012. He went on to win reelection in 2014 by six points, his third statewide race in four years.

That resume -- and his performance at the recent Iowa Freedom Summit -- has created quite a bit of buzz around Walker's name. And he is not doing much to hide from the attention, launching a political committee last week to help him travel and raise money as he considers a presidential bid.

One of Walker's main hurdles going forward is to overcome the narrative that he is not the most charismatic personality in the Republican field. His showing at the Des Moines cattle call seems to have helped in that effort. Walker was engaging and told the crowd about his thrifty shopping habits at Kohl's and how his family faced threats after his battle with the unions.

\"He completely destroyed that argument,\" says one veteran Iowa strategist who is still unaligned in the 2016 race. \"He can be a real player in the caucuses.\"

Walker's showing in Iowa may have opened eyes among some Republicans, but more attention from Republicans will likely mean just the same from Democrats who would like to see his prospects derailed.

\"One star turn in Iowa won't hide Scott Walker's record,\" says Ben Ray, the communications director for the progressive research organization American Bridge. Ray also notes that Walker came up short in his pledge to create 250,000 jobs in Wisconsin in his first term. \"Walker didn't even hit 60 percent of that goal. If there were any public school teachers left in Wisconsin, they'd label that a failing grade.\"

For his part, Walker insists the \"boring\" label doesn't bother him as much as some others might. \"I'd rather have bland or uncharismatic than dumb or ignorant, or corrupt or any of the other things that they could label other would-be candidates out there. Or old, for that matter,\" Walker told Milwaukee-based conservative talk-radio host Charlie Sykes on Wednesday.

Sykes, who has known Walker since the early 1990s, suggests the wider political world is beginning to get a taste for what Wisconsinites already know. \"Nobody thinks of him as boring and bland here,\" Sykes says.

Sykes adds: \"Walker has no big negative. There is no group that is going to say, 'Oh, God, we can't stand Walker.' He would be everybody's second choice.\"

Others say that Walker's lack of a defined base could pose a challenge. \"He straddles the Evangelical and establishment wings of the party,\" said the Iowa strategist. \"Both camps are comfortable with him, but that means they're also just a touch skeptical.\"

Walker will have the opportunity to quell any doubts as he makes the rounds to early voting states and meets with conservative activists. He is scheduled to speak at a New Hampshire GOP rally in March and attend the Southern Republican Leadership Conference in May.

The real test for Walker and other lesser-known candidates, says Madden, will come once the primary debates begin. \"The ability to make that case in a debate setting will be a huge opportunity for candidates who right now don't have a fully developed profile,\" Madden notes. \"For the candidates in the single digits, they have to seize that opportunity.\"