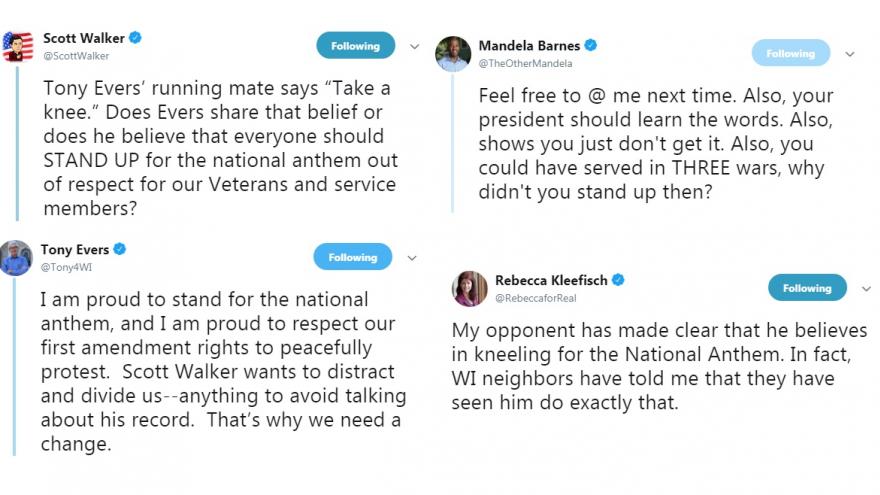 Tony Evers’ running mate says “Take a knee.” Does Evers share that belief or does he believe that everyone should STAND UP for the national anthem out of respect for our Veterans and service members? pic.twitter.com/0zT9X4tO7H

Walker's tweets elicited a quick comeback from the Democratic lieutenant governor candidate, who questioned Walker's patriotism and asked why he never served in the military.

Feel free to @ me next time. Also, your president should learn the words. Also, shows you just don't get it. Also, you could have served in THREE wars, why didn't you stand up then? https://t.co/yTunbMWzmc

The back-and-forth played out in a series of tweets that came hours before the Thursday night kickoff of the NFL season. Walker, a Republican seeking a third term, punctuated one message with a cartoon image of himself known as a bitmoji in front of an American flag, hand on heart.

And none of this staying in the locker room either. STAND UP. Be honorable. Show respect. It’s a simple ask compared to what our service members sacrifice EVERY SINGLE DAY for us. ?? pic.twitter.com/vJG91BnLRb

In another tweet, Walker asked whether Democratic candidate for governor Tony Evers supports "NFL players blatantly disrespecting our flag and the Wisconsin men and women in uniform? If he wants to be the leader of our state, he owes them an answer."

Evers responded by saying he's proud to stand during the national anthem but respects the free-speech rights of those who protest.

I am proud to stand for the national anthem, and I am proud to respect our first amendment rights to peacefully protest. Scott Walker wants to distract and divide us--anything to avoid talking about his record. That’s why we need a change.

"Scott Walker wants to distract and divide us--anything to avoid talking about his record," Evers said.

Walker started the flap by retweeting a January message from Evers' running mate Mandela Barnes where Barnes posted "Take a knee" in reaction to a story questioning whether Trump knew the words to the national anthem.

Barnes, who is African American, issued a stinging response to Walker, saying that "your president should learn the words" and "you just don't get it."

"Also, you could have served in THREE wars, why didn't you stand up then?" Barnes tweeted to Walker.

Neither Walker nor Evers, or either of their running mates, has served in the military. Walker, 50, has been in elected office since 1993 when he was 25 years old.

My opponent has made clear that he believes in kneeling for the National Anthem. In fact, WI neighbors have told me that they have seen him do exactly that. https://t.co/knyWcObyz3

Barnes also posted an image of himself wearing a Colin Kaepernick jersey. The former San Francisco 49ers quarterback began a wave of protests by NFL players two seasons ago, first sitting on the bench and then kneeling during the national anthem to protest police brutality and racial inequality.

The protests have grown into one of the most polarizing issues in sports, with Trump loudly urging the league to suspend or fire players who demonstrate during the anthem.

Walker first weighed in publicly on the national anthem debate in October, sending a letter to NFL Commissioner Roger Goodell and Players Association Executive Director DeMaurice Smith that said he believes kneeling players are showing disrespect for the flag and veterans.