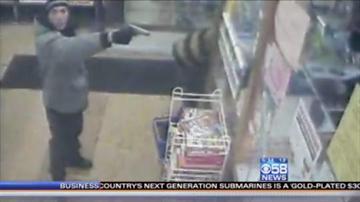 MILWAUKEE -- Milwaukee police are looking for three men who opened fire at a corner store during a violent robbery--which was all caught on tape.

One man hangs out near the door. Two others are seen calmly walking into the store.

In the next frame, two men are seen running behind the cash register and grabbing cash.

In the next few frames, one man is seen pointing and waving a gun around the store, later firing shots and hitting a store employee in the leg.

A woman and her three children were inside at the time, witnessing the aggressive robbery.

The owner said he is stunned that such a brazen crime would happen at his store.

\"I can't get over it, you know, it's like everybody who comes to the store is going to pull a gun on me and I am still shocked,\" Mohamed Yafei told CBS 58 News. \"We could be armed, but we're not here to do such things.\"

One suspect is described as a white male, 5’10” to 6-feet tall, with a thin build. He was wearing a gray jacket, dark jeans, a black and white knit hat.

A second suspect  is described as a black male, 5’10” to 6-feet tall, wearing a black hooded sweatshirt and gray pants.

The third suspect is described as a black male, 6-feet tall, wearing all black.