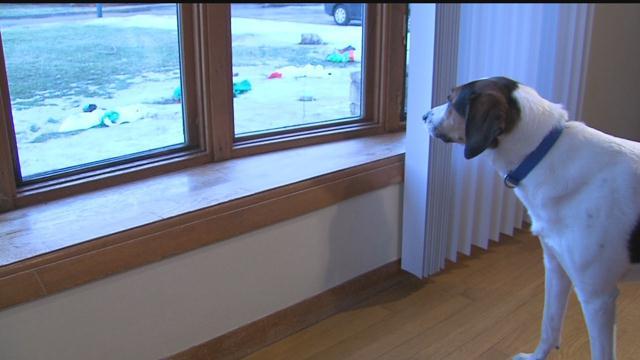 A Walworth County woman is fighting back against what she calls an outdated ordinance that bans dogs after one bite.
Her four-year-old beagle mix injured a child last year and as CBS 58's April Dovorany found out, the case is now headed to a jury trial.

We spoke with the child's father; he says he doesn't understand why the village is taking action because he believes this was all an accident.

"I believe he should stay. I'm not pressing charges. I'm not looking for any trouble. Nothing out of this situation," said Matt Haeni.

Haeni was the sole witness to what happened to his daughter in January of last year.

Then 16-month-old Victoria Haeni was taken to the hospital and did get stitches but her dad says this was not a bite.

"This was a complete and utter accident. I was sitting within arm's reach away," said Haeni.

He refuses to press any charges. But accident or not: the village penalized Prince's owner Teresa Taylor.

"I was issued a citation  for dog assault or attack by the village and issued a letter that I had violated the ordinance and Prince had to be removed from the village of Walworth," said Taylor.

From January until October, Taylor racked up thousands of dollars in boarding and legal fees, until a municipal judge dismissed the case, only to have the village appeal weeks later and request a jury trial.

With no incidents prior or since for Prince, Taylor can't figure out what the village will get out of this.

"They get their hundred dollars I think, for the citation, and then we move out of Walworth," said Taylor.

We reached out to the village, who declined to comment.

Meanwhile, Haeni says months after the incident his daughter and Prince are still friends.

"He's quiet, he wants to kiss everyone," said Haeni.

Taylor says regardless of how the March jury trial ends, she hopes the takeaway is that this ordinance needs to be changed.

A Change.org petition has been started for the family, you can access it here: https://www.change.org/p/village-board-of-walworth-wi-fight-for-prince?recruiter=491080274&utm_source=share_petition&utm_medium=facebook&utm_campaign=share_for_starters_page&utm_term=des-lg-google-no_msg&fb_ref=Default