Vigil for Grandmother, Child Killed in Crash with Stolen Car 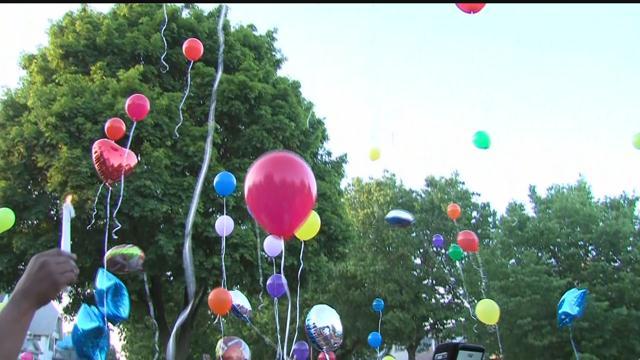 CBS 58-- A family is grieving the loss of an 8-year-old boy and a 46-year-old woman, killed in a crash involving a stolen SUV.

The crash happened Friday at 39th and Hadley. The SUV, reported stolen in Racine last month, ran a stop sign and smashed in to the victims’ car. The two victims are Danielle Triggs, known as Peaches, and her grandson, Taeshawn Griffin. In addition to the two people killed, two other adults and three other kids were hurt.

Dozens closed down the block at 39th and Hadley to remember Peaches and Taeshawn Monday night. Family says the 8-year-old was in town visiting his grandmother and they were headed to the park at the time of the crash.

“We are now burying two parts of our family,” said Laurice Triggs, who is Peaches’ sister and Taeshawn’s aunt.

Through tears friends and family shared memories of the grandmother and grandson.

“She was always just a burst of fresh air,” said Nana Grier, a friend of Peaches.

“Taeshawn he was nothing but God's angel,” Laurice said. “Nothing but a positive heart, a giver.”

Police are still searching for the two teenage suspects and the family of the victims is pleading for them to surrender.

“At this point your heart should be hurting,” Laurice said. “I know you’re afraid i know you’re scared but it happened face it.”

If you want to help the family with funeral costs, you can donate to Taeshawn here and Peaches here.