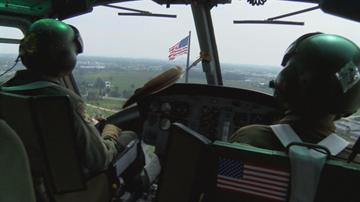 SHEBOYGAN -- Vietnam veterans never received the welcome they deserved, returning from a war many Americans chose to forget.  Decades later, many of those same veterans made it their mission to teach people what they went through and the way they're doing it is pretty hard to  miss.

\"When they heard it coming from miles away was the sound of hope,\" veteran John Walker said.

Sunday, that sound of hope echoed over Sheboygan, as members of American Huey 369 offered people the chance to relive history - flying on board Warrior 11, an actual Vietnam Huey Helicopter.

\"Educate the young and the not-so young as to what we did because we're very proud of what we did,\" Army Veteran Phil Marshall said.

Marshall flew Huey medevac missions over Vietnam.  In four-and-a-half months, he helped rescue 379 men while only losing one.

\"That was our job,\" Marshall said.  \"Nineteen, 20, 21-year-old kids flying unarmed helicopters to pick up the wounded in the heat of battle often.\"

Like most Vietnam vets, Marshall didn't get a warm welcome home.  In the years to follow, he dedicated his life to making sure what his fellow servicemen and women did wouldn't be forgotten.

\"When you have a nine-year-old child look up at you and when you say this helicopter flew in Vietnam and the nine- year-old says, 'What's Vietnam,'  boy, that hurts,\" Marshall said.

\"There's a lot of history to preserve,\" Walker said.

The pilot started finding and buying Hueys in the 2000s, restoring Warrior 11 at a cost of around $1 million.  But to Walker and his team, it's not about the price, but rather the lessons they can teach and the old wounds they can repair.

\"[We] Have an opportunity to show their grandkids where they sat when they were flown into battle,\" Walker said.  \"[Veterans] go home talking about it and that's the healing.\"

Walker tells CBS-58 News in eight seasons of flying they've had 126 scheduled events.  Not one of those has been canceled due to bad weather or maintenance, something he credits to fallen veterans wanting their story told from above.