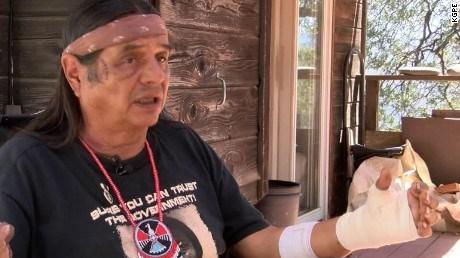 (CNN) -- A California Vietnam veteran now has bear attack scars to go along with his battle wounds.

\"I could feel his strength. I felt like a little rag doll underneath him,\" Yepez told CNN affiliate KGPE.

The encounter happened early Thursday, when Yepez stepped outside his home in Midpines, near Yosemite National park. He said the bear was about 10 feet away and despite his yelling \"get away,\" the animal continued toward him, jumped on him and knocked him down.

And that's when it got bloody.

\"I could hear the crunching ... when he bit down (on my wrist). He ripped towards my neck and then again the belly,\" Yepez recalled while pointing to his injured body parts.

During those terrifying moments, his military instincts kicked in \"and said -- you got to fight,\" Yepez recalled.

Even though he was punching the bear, he told the affiliate that the battle ended when he pushed it off with both legs and his dog created a distraction -- and they both ran inside. The bear apparently took off in a different direction.

Despite the painful injuries to his wrist, face, neck and stomach, Yepez drove himself to a nearby hospital.

Yepez says he served in the Vietnam War, and suffered injuries to his wrist, foot and back. He showed his Purple Heart medal to the affiliate and talked about his basic training.

\"They tell you to remove the word 'can't' from your vocabulary. Don't you ever say that word again -- can't. And then they say -- take the pain,\" Yepez said.

The Mariposa County Sheriff's Office is warning residents to be on the lookout for the bear and keep an eye on children and pets.

Wildlife officials plan to euthanize the bear when it's found.