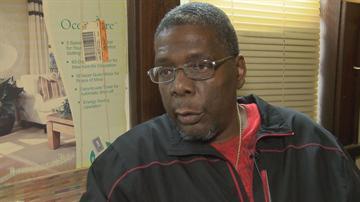 MILWAUKEE -- Every day for the past three-and-a-half years, Vietnam veteran Phil Braxton has suffered from pain.

\"I'm so frustrated with the situation that I said, 'What's the use of living,'\" Braxton said in his West Allis apartment.

Doctors in Chicago first diagnosed a tumor in his head, but even after treating that, the pain remained, so Braxton called the VA Medical Center in Milwaukee. He says it took months to be seen.

\"There is no need for a veteran to have to wait six months or a year or more before he can have an  appointment,\" Braxton said.

Braxton says the VA Doctors ran an MRI on his head, but only prescribed him pain medication and botox  injections near his eye.  He says those damaged his muscles and blurred his vision.

Braxton then went to Aurora St. Luke's on his own dime.  There, doctors discovered he had mini strokes and blood clots.

\"I started crying in the doctor's office,\" Braxton recalled.  \"Me and my wife looked at each other and I was crying.\"

The army veteran says he tried to go back to the Milwaukee VA, only to wait another seven months for an appointment.

\"Health care is very complex and we take any and all concerns very seriously,\" Milwaukee VA Public Affairs Officer Gary Kunich said Tuesday over the phone.

Kunich couldn't comment specifically about Braxton's records.  He admits a small number of veterans, about four percent, don't get seen within two weeks.  But 55,000 are treated in less than 30 days.

\"It has always been a primary focus that if a veteran cannot be seen in a quick amount of time that we offer them care in the community at our expense,\" Kunich said.

For Braxton, that could mean an operation at Froedert Hospital on his head that requires a year of therapy -- a procedure he says St. Luke's doctors could avoid.

\"[The VA doctors] try to treat the symptom instead of finding what's causing the problem or cause you to have these symptoms.\"

Braxton tells CBS-58 the St. Luke's doctors recommended a non-surgical \"cyber knife\" treatment, but that costs more than $200,000, a price he can't pay.  The VA recommends he and any other vet having problems with care should contact their patient advocate.