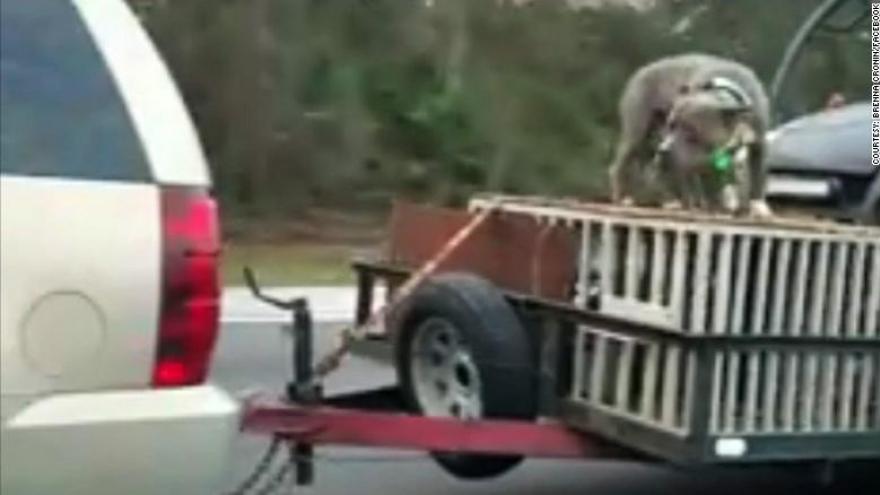 (CNN)A dog who was captured on video while chained to the top of a trailer traveling along a Florida interstate is OK.

Brenna Cronin and her boyfriend were driving near the Flagler exit on Interstate 95 on Wednesday when they saw the "shocking" sight. A dog was standing atop a crate carrying another animal.
"We saw a dog chained to a crate. I had never seen anything like that before," Cronin told CNN. "I was completely appalled and disgusted."
As the SUV barreled down the interstate at high speeds, the dog cowered, exposed to the open air. It had an "S" branded into its back leg, she said.
"As I was filming the dog and he saw me, he stood up and looked so scared. You know when dogs are happy, they have their tail wagging and a big smile. He was terrified," Cronin said.
Once Cronin got home, she reported what she saw to the Flagler Humane Society.
She posted the video on Facebook, which had been viewed 1.4 million times as of Friday afternoon. Hundreds commented in outrage, questioning the treatment of the dog.
The dog's owner responded to the Facebook post and contacted Flagler Animal Services the next day. The owner has not been publicly named.
Flagler Animal Services checked out the dog Thursday and said he's being "well cared for."
His name is Zeus and he's a Blue American Pitbull Terrier.
The driver told the animal service he was traveling from Hastings to go hog hunting with the dogs. One of the dogs was in a hunting box, while Zeus was riding atop the box.
Transporting dogs in the open air is permitted under a Flagler County ordinance:
"All dogs taken off their owner's property and transported in the open bed of pickup trucks, or in any other type of open vehicle, to public places or residential area shall be confined in pens in or on such trucks or other vehicles or be restrained by a minimum or two tethers or some other similar method to safely control or restrain the dogs from easily escaping the vehicles."
Zeus wasn't tethered properly, though.
"You need two tethers for what that person was doing and he had one. If he would have had two, it would have been alright with the way the law was," said Flagler Humane Society Development Coordinator Jeffrey Ritter.
The owner received a ticket for failure to properly tether an animal in violation of the ordinance.
Share this article: