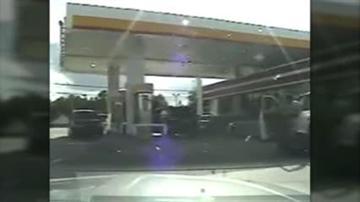 (CNN) -- One moment, a man reaches into his vehicle after a South Carolina trooper asked for his driver's license.

Seconds later, the trooper shoots him, and the man asks why. Days afterward, prosecutors aren't satisfied with the answer.

Authorities released dash-camera video Wednesday showing what they say is Sean Groubert, a decorated South Carolina Highway Patrol trooper, shooting Levar Jones, who was unarmed, in the parking lot of a gas station just outside Columbia on September 4.

Jones, 35, survived the shooting. But Groubert, who has since been fired for the incident, has been charged with aggravated assault and battery, a felony that could get him up to 20 years in prison if convicted, the South Carolina Law Enforcement Division said Wednesday.

\"The force administered in this case was unwarranted, inconsistent with how our troopers are trained, and clearly in violation of department policies,\" South Carolina Public Safety Director Leroy Smith said last week in announcing Groubert's firing.

This wasn't the first time Groubert had fired his weapon. He was lauded the previous time: His department gave him a medal of valor for an incident in which he and another trooper shot and injured a man who had shot at them in 2012, SCPSD spokeswoman Sherri Iacobelli said.

In this year's incident, police said Groubert, 31, stopped Jones in the parking lot of a Circle K station in daylight, for what police say was an alleged seat belt violation, around 5 p.m.

Video that authorities say was recorded from Groubert's police car shows the trooper driving up to a vehicle just as its driver -- who authorities say is Jones -- steps out of the vehicle.

When Groubert asks for Jones' license, Jones pivots toward the vehicle he just exited -- the driver's door is still open -- and leans inside as if to retrieve something, the video shows.

About two seconds later, the trooper that police identify as Groubert comes into view with a gun drawn and yells \"Get out of the car! Get out of the car!\" The gun is fired -- at least four shots are heard -- and Jones steps away from the vehicle, raising his hands in the air and eventually moving off camera.

\"I just got my license! You said get my license!\" says someone off camera, apparently Jones.

After being told to put his hands behind his back, Jones asks: \"What did I do, sir?\"

\"Are you hit?\" asks another off-camera voice, apparently Groubert's.

\"Well, you dove head-first back into your car. Then you (unintelligible), I'm telling you get out of your car.\"

Shot in the hip

Jones was shot in the hip, CNN affiliate WACH reported. He was taken to a hospital and later released, authorities said.

Jones was found not to be armed, Smith said.

\"I believe this case was an isolated incident in which Mr. Groubert reacted to a perceived threat where there was none,\" Smith said last week.

In explaining Groubert's firing Friday, Smith said the department's policy on using force says that officers can use \"only the level of force necessary to accomplish lawful objectives.\"

\"That protocol was not followed in this case. Further, this incident occurred in broad daylight. Mr. Groubert had a clear and unobstructed view of Mr. Jones,\" Smith said.

The shooting, Smith said, \"deviates from SCDPS standards and cannot be tolerated.\"

Groubert, who joined the Highway Patrol in 2005, earned kudos for the other time he'd fired his gun in the line of duty.

Police said Groubert stopped a car that had passed him at a high rate of speed in Richland County in August 2012. The driver eventually took off without permission, and Groubert pursued him, police said.

Another trooper joined the pursuit, and the driver stopped at a bank, exited his vehicle and fired shots at both troopers in the parking lot, police said.

Groubert and the other trooper returned fire, injuring the suspect, the SCDPS said. At some point, it appeared that the suspect intended to go inside the bank, Iacobelli said.

That suspect was charged with attempted murder and convicted in 2013, according to the SCDPS.

The SCDPS gave Groubert a medal of valor in 2013 for his handling of the incident, Iacobelli said.
Share this article: