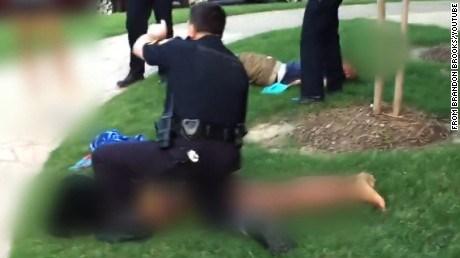 The outrage was immediate. After a video surfaced of a chaotic confrontation between teens and police at a community pool in Texas, calls for the officer's dismissal were swift and loud.

The police officer is on administrative leave after the YouTube video showing the incident Friday in the Dallas suburb of McKinney.

As the outcry continues, a lot of unanswered questions remain.

Were the teens from the neighborhood? Does the pool have security cameras showing the entire incident? Who is the officer? Has he had any previous discipline problems?

The McKinney Police Department said officers went to the pool because they got calls about unruly teenagers.

\"The initial call came in as a disturbance involving multiple juveniles at the location -- who do not live in the area or have permission to be there -- refusing to leave,\" it said.

The approximately seven-minute video shows officers trying to gain control of a group of teenagers at the pool.

A few minutes into the video, an officer throws a 14-year-old girl wearing a bikini to the ground and shoves her head down.

Two teenage boys approach; the officer pulls out his gun and chases them away. He then grabs the girl's arm as he re-holsters his gun.

\"On your face!\" he orders and slams her face-first into the grass. The officer places both of his knees on her back as she cries.

\"Is it just me or did he look like he enjoyed kneeling on top of her a little too much?,\" Elizabeth Millaine Nations posted on the Police Department's Facebook page. \"She was in a bikini for Christ's sake.\"

But David Wagner said the officer's action was justified.

\"Outside of being a little rough with the girl, I think the officer responded correctly,\" he posted on the page. \"He was vastly outnumbered and the crowd was hostile. They could have overrun him and taken away his weapon. By drawing his weapon he was able to get the crowd to retreat.\"

Demands for an investigation

The McKinney Police Department said it is investigating after the video \"raised concerns.\"

It has not identified the officer placed on leave, but Chief Greg Conley said the girl was detained and released to her parents. Two officers with the McKinney Police Department are conducting an investigation, he said.

Twelve officers responded to the scene, but it's not clear how many were there when the video was shot, Conley said.

The NAACP called for a thorough investigation and full accountability.

\"The excessive force on an unarmed 14-year-old girl clad only in a bikini by an officer wearing a uniform and a gun was particularly troubling,\" said Cornell William Brooks, president of the NAACP. \"These teens appeared to be simply attending a pool party and deserved respectful treatment under the law.

She was wearing a bikini, \"clearly not armed,\" he said.

CNN law enforcement analyst Cedric Alexander cautioned that one video doesn't tell an entire story. He said officers were likely dealing with a lot of teenagers running around and not obeying basic orders to disperse.

\"I thought the kids were not compliant whatsoever,\" said Alexander, who is the public safety director of DeKalb County, Georgia.

\"That in itself is a problem. Those kids attempted to over-talk the police.\"

Alexander said he would not \"demonize\" or second-guess the McKinney officers based on the video.

However, he said, the officer who wrestled the girl to the ground could have controlled his temper.

\"They are teenagers and we are the professionals,\" he said. \"You can't allow emotions to get in the way.\"

CNN legal analyst and attorney Paul Callan said more must be learned about exactly what police were told in calls.

\"The nature of the police response should be proportionate and appropriate to the perceived threat,\" he said.

But the officer taking out his gun might be justified, Callan said, because he could have reasonably assumed the young men who approached him to be a real threat.

But when the teenagers scattered and ran, the police went to an \"inappropriate Texas roundup of all fleeing juveniles,\" Callan said.

He said the teens' panic appears to be a result of overreaction because of the officer's aggressive demeanor.

And the girl's treatment, he said, appears to be punishment for her attitude rather than any particular crime.