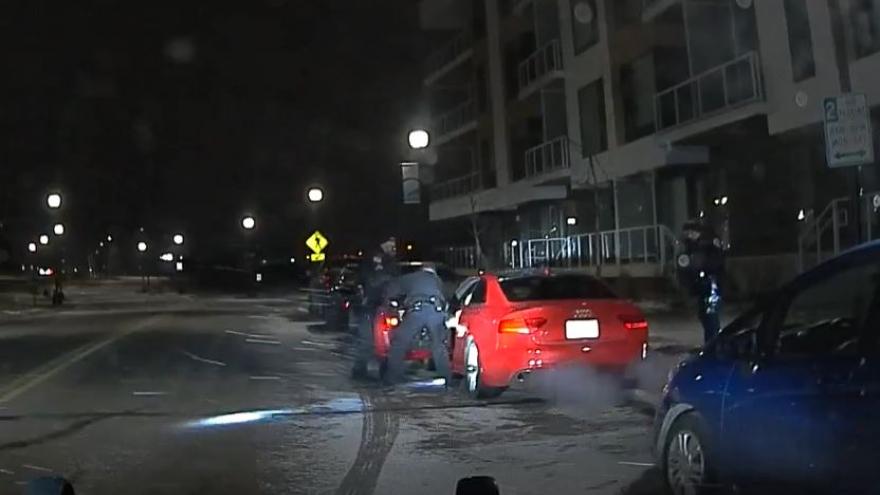 It happened Jan. 22 near 6th and Drexel, according to an incident report. The officers responded to the location to check on an individual who was said to be passed out in a car on the side of the road.

Officers located the driver hunched over with an open bottle of liquor in the vehicle.

The officers began banging on the windows, according to the report, and the driver started to wake up, rolling down his window and pretending to be on the phone.

At this time, the two responding officers asked a third officer who arrived on scene to place stop sticks at the back passenger tire, noting the possibility that the man may try to take off.

Officers asked the man to step out of his car, but he refused, eventually starting up the vehicle. One of the officers then stuck his hand through the open window and tried to unlock the car door, but the man grabbed his hand. This happened twice -- the second time, the officer successfully opened the door, but the man held on to the door handle, trying to close the door on officers.

One of the officers stepped around to the inside of the open car door, just in front of the second officer, and the two attempted to remove the man's hands from the door handle. That's when police say the man began revving his engine. The report says the man then put the vehicle in reverse and accelerated rapidly, using the open driver's door to strike the officers.

One of the officers fell backwards about eight feet, falling into the second responding officer and then onto the pavement.

The suspect allegedly backed into another vehicle, then drove forward, heading southbound on 6th Street with no headlights on.

After nearly a five-mile pursuit, all squads terminated the chase as the suspect reached speeds in excess of 100 miles per hour in slippery and dangerous conditions.

At this time, one of the officers reported to an area hospital for treatment of his left hand.

The suspect was later located, taken into custody and given citations for OWI causing injury and fleeing/eluding officers causing bodily harm.

The man is also facing charges of battery to law enforcement, operating while suspended and resisting or obstructing an officer.