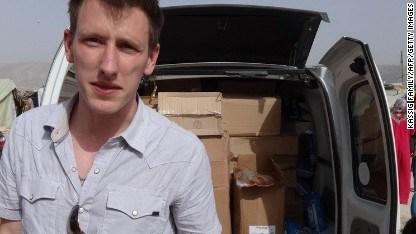 (CNN) -- Militants claim to have beheaded American hostage Peter Kassig in a video published to the Internet on Sunday, purportedly from terror group ISIS.

The video shows the aftermath of a beheading, in which the victim is not clearly recognizable. CNN has not been able to confirm the authenticity of the video nor the identity of the victim.

Kassig, 26, who converted to Islam in captivity, also went by the name Abdul-Rahman Kassig.

He went to the Middle East as a U.S. soldier and returned as a medical worker, feeling compelled to help victims of war.

He did aid work in Syria, where he was captured. He was held hostage for over a year.

Kassig's parents, Ed and Paula Kassig, acknowledged the reports of their son's death in a statement and said they would wait for government confirmation of their authenticity. They asked for privacy.

The White House issued a statement condemning the purported killing and said intelligence officials were working to determine the video's authenticity.

\"If confirmed, we are appalled by the brutal murder of an innocent American aid worker and we express our deepest condolences to his family and friends,\" said National Security Council spokeswoman Bernadette Meehan.

\"I'm horrified by the cold blooded murder of Abdul-Rahman Kassig. ISIL have again shown their depravity. My thoughts are with his family,\" Cameron said on Twitter.

A familiar figure appeared in Sunday's video claim, dressed in all black and speaking with what sounds like an English accent.

A man fitting the same description appeared in previous videos of the apparent beheadings of other Westerners.

But this recording is different from previously released ones. It is longer, almost 16 minutes, and does not include a statement by the victim, as previous ones had.

And it is utterly brutal, showing in graphic detail the beheadings of other men, whom militants claim are pilots for the Syrian government.

The narration spends much time on ISIS' history and the figure taunts U.S. President Barack Obama, saying he will have to return troops to Iraq in greater numbers than before.

And for the first time in such a video, the speaker names the place where he is standing with the victim -- in the town of Dabiq in Aleppo province, Syria.

Kassig is the fifth Westerner whom ISIS claims to have beheaded via video messages.

The first was U.S. journalist James Foley. A video of his killing was posted online in mid-August, just over a week after Obama approved \"targeted airstrikes\" against ISIS.

In early September, ISIS released a video showing the beheading of U.S. journalist Steven Sotloff. Sotloff's apparent killer spoke in what sounded like the same British accent as the man who purportedly killed Foley.

And on October 3, ISIS released a video showing the apparent beheading of hostage Alan Henning.

Kassig's life was threatened in that last video.

A week after its release, Kassig's family released a YouTube video of its own, asking his captors to show mercy and free him.

Kassig's mother, Paula, addressed her son in the video. \"We are so very proud of you and the work you have done to bring humanitarian aid to the Syrian people,\" she said.

The couple noted they were releasing the video on the day of Islam's Eid al-Adha, or the Festival of Sacrifice, when Muslims slaughter lambs, goats, sheep and cattle and distribute the meat to the poor and their families.

From 2012, he delivered food and medical supplies within and outside Syria and provided trauma care and training, his family said.

Kassig's journey began when he joined the U.S. Army Rangers in 2006 and deployed to Iraq in 2007. He was honorably discharged for medical reasons after a brief tour and returned to the United States to study political science and train for 1,500-meter races. But something wasn't right.

\"I was going to school with kids who look the same, were the same age as me, but we weren't the same,\" he said in an interview with CNN in 2012. \"I wanted more of a challenge, a sense of purpose.\"

In 2010, Kassig took time off and began his certification as an emergency medical technician.

In the two years that followed, he fell in love, got married and quickly divorced. Devastated and heartbroken, he went back to school, but he couldn't shake his depression.

He eventually traveled to Lebanon, and founded SERA to deliver food and medical supplies to swelling refugee camps.