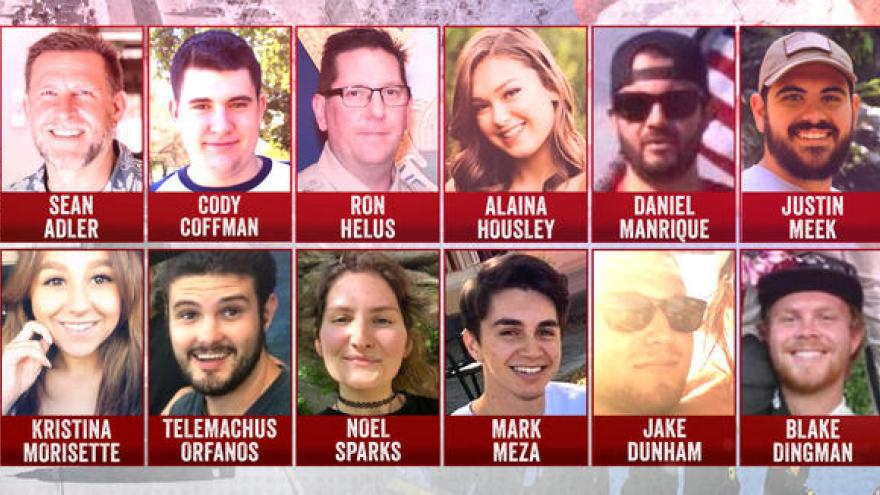 THOUSAND OAKS, Calif. — The identities of 12 people who were shot and killed by a gunman in a California bar late Wednesday have started to emerge. A big brother and a recent graduate were among those who died in the shooting at the Borderline Bar and Grill, which was holding a weekly country music dance night for college students.

Here is a look at the victims who have been identified:

Jason said Cody had just turned 22 and that he was on his way of fulfilling his dream of serving his country. He was talking to recruiters about joining the military.

Cody had two young brothers, aged 8 and 6, and a sister who has not been born yet. "He wanted to be the big brother to these two boys and one sister that's coming," Jason said.

He said he wants to pray for everyone else who is going to go through this same situation, adding, "There's many more to come, but for me this is a heart that I'll never get back."

Another victim was identified Thursday as 23-year-old Justin Meek. California Lutheran University said in a campus alert it learned from the family that Meek, a recent graduate, died in the shooting.

"Meek heroically saved lives in the incident," the university said.

The university said earlier that classes were canceled Thursday.

Ventura County Sheriff's Sgt. Ron Helus was killed while responding to the shooting. He was on the phone with his wife when he was dispatched to the Borderline Bar & Grill, Sheriff Geoff Dean told reporters.

"'Hey, I gotta go handle a call, I love you, I'll talk to you later,'" Dean said Helus told his wife.

Earlier, on "CBS This Morning," Dean said he and Helus were friends. The sheriff said he had "no doubt" that Helus and a California Highway Patrol officer accompanying him saved lives by engaging with gunman Ian Long.

Alaina Housley was identified as being among the dead after reports she was missing. "Sister Sister" actress Tamera Mowry-Housley and her husband, former Fox News correspondent Adam Housley, said earlier they were looking for her. Alaina is their niece.

"Alaina was an incredible young woman with so much life ahead of her and we are devastated that her life was cut short in this manner," they said. "We thank everyone for your prayers and ask for privacy at this time."

"He has a couple kids that he adored and loved ... a great man ... he loved to protect people, he just was a sound guy," his friend Todd said.