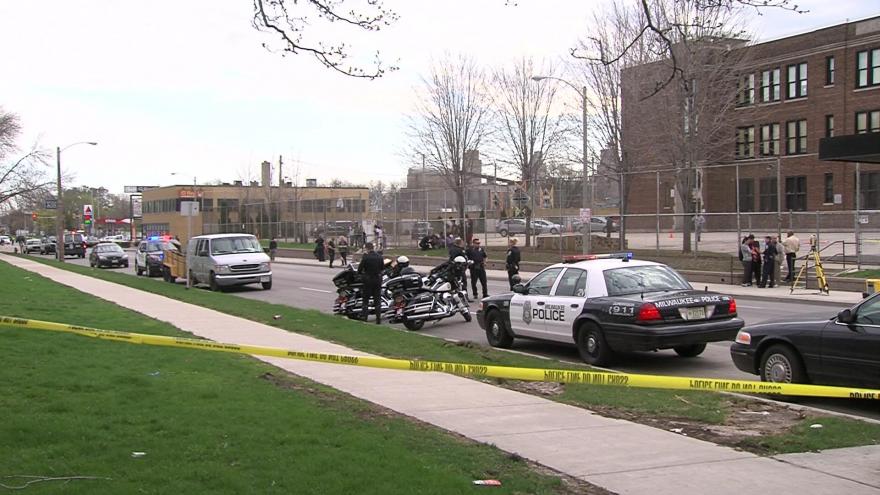 The Milwaukee Police have indicated they have a person in custody for questioning in the deadly hit and run on Milwaukee's south side Tuesday, but that person is not considered a suspect.

The hit and run accident happened Tuesday afternoon near 35th and Mitchell near a school.

The victim is a 62-year-old man and tonight witnesses are telling CBS 58 News that he sacrificed himself to save others.

At 35th and Mitchell, crime tape surrounds a deadly scene where police say a driver struck a 62-year-old man and kept going.

\"I think he was like right here and he got hit, and when he got hit he got thrown in the air.\"

Police say it happened around 3:30 p.m. as school was getting out at Greenfield Bilingual School.

Witnesses say the man had just picked up two children when the suspect sped through a red light and hit him.

\"He pushed them out of the way as soon as he saw the dude coming, and he smacked him, it was too late to get himself out of the way.\"

Police believe they found the vehicle involved in the act but the suspect remains on the loose.

\"He kept going, that's crazy cause that's a family at the end of the day. He has kids and they were waiting right by the body of the dad.\"

\"It's a tragedy to see someone lose their life, and have two small kids growing up without a father.\"

Tonight, neighbors are pleading with the suspect to do the right thing.

\"Who does that? You know what I'm saying? They should turn themselves in.\"

Police have not confirmed whether the man had children with him while he was crossing the street.