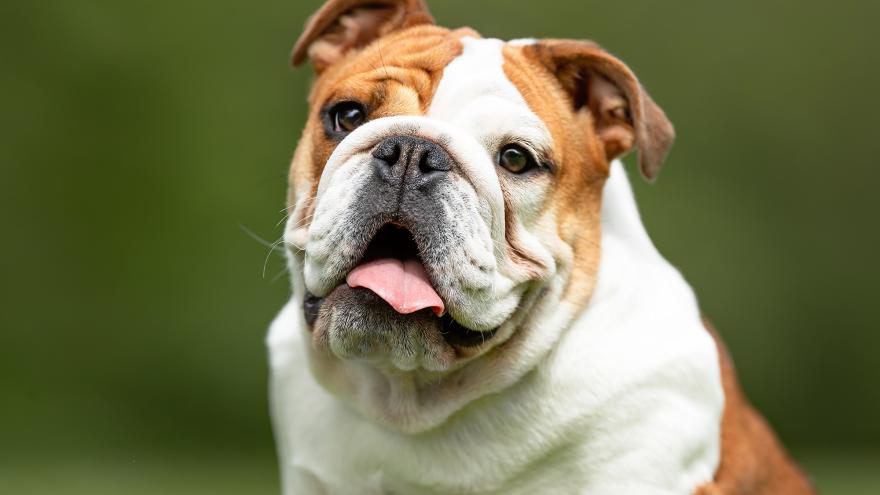 (CNN) -- Veterinarians are calling on animal lovers to stop buying English bulldogs, because of "major" concerns about their health.

The breed, also known as the British bulldog, is "compromised" by a "high rate of health issues related to extreme body shape" that has been bred into them, according to the UK's Royal Veterinary College (RVC).

A new study by the college calls for "urgent action" to reduce the many serious health problems that, it says, are associated with the breed's "exaggerated features," such as their flat faces.

The vets hope the study, which reveals that English bulldogs are more than twice as likely to develop a range of health disorders, will deter people from breeding and buying dogs designed to look this way.

In a press release posted online, the college said: "The English Bulldog has risen sharply in popularity in the UK over the past decade. However, its distinctive and exaggerated short muzzle, protruding lower jaw and stocky body shape has been linked with several serious health and welfare issues, including breathing problems, skin and ear diseases and eye disorders.

"Sadly, many of the breed's problematic characteristics such as a very flat face, deep facial skin folds and noisy breathing are still often perceived by many people as 'normal' or even 'desirable' novelties rather than major welfare issues."

The RVC's VetCompass program compared the health of random samples of 2,662 English bulldogs and 22,039 dogs of other breeds. It found the bulldogs were more than twice as likely to have one or more disorders in a single year than other breeds.

The bulldog was developed centuries ago in England for use in fighting bulls. Characteristically powerful and often vicious, the breed almost disappeared when dog-fighting was outlawed in 1835. However, enthusiasts saved it by breeding out its ferocity.

The vets argue that the public should embrace the breed's more natural look, saying: "In the future, the English Bulldog should become recognised and loved for having a longer face, smaller head and non-wrinkled skin, representing a more moderate and healthier conformation."

Dan O'Neill, lead author of the paper and associate professor in companion animal epidemiology at the RVC, said: "Every dog deserves to be born with equal and good innate health by having a natural ability to breathe freely, blink fully, exercise easily, have healthy flat skin, mate and give birth.

"For breeds such as English Bulldogs where many dogs still have extreme conformations with poor innate health, the public have a huge role to play by demanding dogs with moderate and healthier conformations. Until then, prospective owners should 'stop and think before buying a flat-faced dog'."

The study was funded in part by the the Kennel Club Charitable Trust. Bill Lambert, health, welfare and breeder services executive at the Kennel Club, said in the statement: "As this research shows, there are increasing numbers of Bulldogs bred outside any sphere of influence and in a certain way because it is perceived to be 'cute', with little regard for health and welfare. A collaborative approach to tackling these issues is crucial; we must continue to work together with breeders, vets and welfare organisations to reduce and ultimately eliminate the health problems faced by brachycephalic (flat-faced) breeds, as well as reduce mass demand for these dogs."