Veterans are being Told to Repay Millions in Enlistment Bonuses 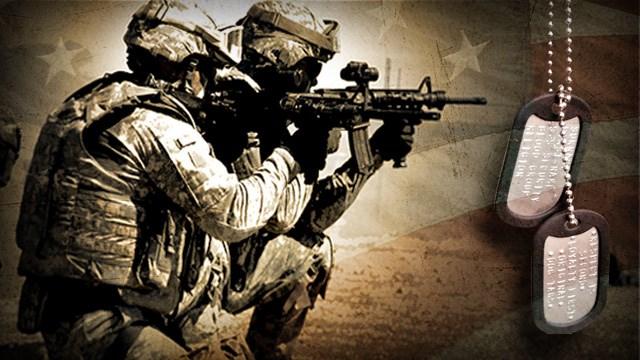 (CNN)Ten years after the Pentagon enticed soldiers to reenlist by offering hefty bonuses, officials are demanding thousands of those veterans pay the money back.

Christopher Van Meter is one of the affected veterans in California. He earned a Purple Heart after he was hurled from an armored vehicle in Iraq. By 2007, he had already served 15 years in the Army and was about to retire -- until the military encouraged him to reenlist.
"They entice you with another reenlistment bonus. Those bonuses were ... around $15,000," Van Meter told CNN's "New Day" on Monday.
"We were in the Iraq and Afghanistan war at the time. And they wanted to keep soldiers in the military."
But years later, officials realized Van Meter and thousands of other veterans were not actually eligible for the bonuses they were given.
As first reported by the Los Angeles Times, only soldiers with certain assignments -- for example, intelligence, civil affairs and some noncommissioned officer posts -- were supposed to get bonuses. But investigators uncovered rampant fraud and mismanagement by California Guard officials trying to meet enlistment targets.
The California Guard's incentive manager, retired Master Sgt. Toni Jaffe, pleaded guilty in 2011 to filing false claims of $15.2 million, the Department of Justice said in a statement.
"When she pleaded guilty, Jaffe admitted that from the fall of 2007 through October 2009, she routinely submitted false and fictitious claims on behalf of her fellow California National Guard members," the Department of Justice said in a statement.
"Jaffe admitted that she submitted claims to pay bonuses to members of the California National Guard whom she knew were not eligible to receive the bonuses and to pay off officer's loans, even though she knew the officers were ineligible for loan repayment."
In 2012, the sergeant was sentenced to 30 months in federal prison.
Three officers also pleaded guilty to fraud and were put on probation after paying restitution, the Times reported.
But, now, thousands of soldiers are paying the real price.
Van Meter, the Purple Heart recipient, was floored when he got a letter saying he owed a combined $46,000 -- including the $15,000 reenlistment bonus, a student loan and an officer bonus.
"They tacked on a 1% processing fee into that," he said.
"It's gut-wrenching because you have to figure out what you're going to do and how you're going to survive."
Van Meter said after he retired in 2013, he had three years to pay off the debt.
"We were paying upward $1,300 a month back to that recoupment. We weren't able to afford everything -- food for the kids, a day care."
Eventually, he and his wife decided to refinance their mortgage to pay off the surprise debt.
Van Meter's family is far from alone. According to the Los Angeles Times, the California Guard has told 9,700 current and retired soldiers to repay some or all of their bonuses.
But Col. Michael Piazzoni, commander of the Soldier Incentive Assistance Center, which performed the audit, said the number is actually lower.
Of about 11,000 soldiers included in the audit, 1,100 were found to have received unauthorized payments that they have to pay back; 5,400 soldiers were found to have missing paperwork or lack of documentation of eligibility, and may have to pay back that money. About 4,000 soldiers were found to be eligible for payments they received.
So far, auditors have confirmed 2,300 unauthorized bonus payments to about 2,000 soldiers, amounting to at least $22 million in unauthorized bonuses. This number includes 1,100 soldiers who received unauthorized payments and those from the 5,400 figure who could not show proof. If the remaining recipients do not produce proper documentation showing they were eligible, they could be liable to pay back those amounts to the Defense Department.
The California National Guard said it can't just ignore the debts -- even if it wants to.
"The bonus audit and recoupment process is a federal program governed and adjudicated by the National Guard Bureau and the Department of the Army. The California National Guard does not have the authority to unilaterally waive these debts," it said in a statement.
"However, the California National Guard welcomes any law passed by Congress to waive these debts. Until that time, our priority is to advocate for our soldiers during this difficult process."
The affected soldiers can petition to have the debt waived, Defense Department spokesman Capt. Jeff Davis said.
"There has been a formal process in place for some time through which affected service members can be relieved of responsibility to repay improperly awarded bonuses," Davis said.
Van Meter told CNN said he has petitioned multiple times, but "to no avail."
Davis said the military has "the authority to waive individual repayments on one by one basis," but does not have the authority to issue blanket waivers.
California senators Dianne Feinstein and Barbara Boxer urged the Defense Department to use its authority to waive repayment.
"They (soldiers) accepted these incentive payments in good faith and at the height of the Iraq War, when the Department was having difficulty retaining service members," they said in a statement.
"Many of these individuals paid a heavy price for their service -- including severe injuries sustained after reenlisting. Now they are facing interest charges, wage garnishment, tax liens, and other penalties.
It's unclear whether Congress will take any action on the issue when members return from election recess next month, the Military Times reported.
House Majority Leader Kevin McCarthy of California said he, too, is appalled.
"Our military heroes should not shoulder the burden of military recruiters' faults from over a decade ago," he said. "They should not owe for what was promised during a difficult time in our country. Rather, we are the ones who owe a debt for the great sacrifices our heroes have made."
Share this article: