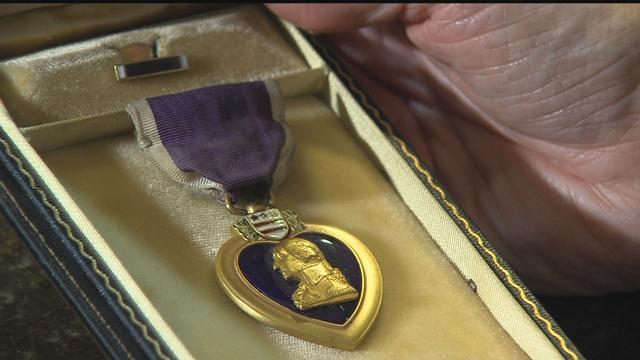 At the tender age of 19, Curt Miller enlisted in the Army.

He served in Vietnam for one year as a helicopter mechanic and gunner, an experience too painful for him to talk about when he returned home.

"He left as a young man and came back as a totally different person," said Jean Miller, sister.

Jean's older brother moved into a cottage up north in Harshaw. When he died of cancer in 1998, the family couldn't find his Purple Heart.

"We wanted to make this room bigger," he said.

In 1996, he was tearing down a wall for a remodeling project when made a special discovery.

"I found this box, and when I pulled out the box," he said, "it was like, I opened it up and wow it's a Purple Heart."

Catherine heard the news from her son Mark.

Soon after, Koppa met the family in Kenosha to return the prized possession.

"I went over and gave him the biggest hug he ever had," Catherine said.

"She says, 'you are my angel,'" said Koppa. "I handed her the purple heart. She opened it up and she just caressed it just like a mother would do."

"I guess in my heart I thought it's so wonderful getting this back," said Catherine. It's almost like hugging him."

The Millers said Koppa even got someone to donate the Purple Bar that was missing, completing a mission of selfless sacrifice, from one hero to another.

"We're so happy and so proud," said Jean. "We're very happy and blessed to call him our friend now."

Nobody knows how the Purple Heart got stuck in the wall, but Catherine now keeps it close by in her bedroom. When she passes, the medal will go with her.