Verona residents clean up after tornado rips through homes 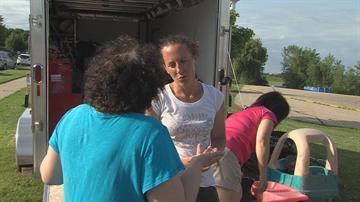 VERONA -- An EF-3 tornado came right through a Verona neighborhood early Tuesday morning, destroying a home and severely damaging others, while homes just up the street werent touched.

\"The power went off, the radio went off and in less than two minutes, the tornado was right on top of us,\" homeowner Shannon Davis said.

Davis spent the rest of the day picking up the pieces of her life.  The tornado came through just after midnight, lifting Davis' garage up and tossing it in the back yard.  Other homes, like the one next door, took harder hits.

By late morning, neighbors and friends like Pete Stremlow came to offer whatever help they could.

\"This is just stuff that can be replaced and rebuilt, but they still have everybody that's healthy and gonna be OK,\" Stremlow said.

\"You plan for the worst, you hope for the best and reality finds you somewhere in between,\" Governor Scott Walker said.

Walker toured the scarred neighborhood Tuesday afternoon after a stop at other damage sites farther west.

\"If it's your home, you feel devastated, but as the chief mentioned, without significant injury, I think that alone is something to be blessed with,\" Walker said.

\"When we issued the tornado warnings it sent the phones off and we heard from a whole lot of people that we scared the pants off them,\" NWS Meteorologist Steve Brueske said.

Scared, sweaty and devastated, but not defeated in Verona, where the cleanup will continue for quite some time.

\"Everybody knows us and everybody came and helped, so it was amazing,\" Davis said.

Governor Walker says most homeowners in the area are insured, but for those who arent, the state has emergency funds at the ready.  State and local crews will stay on hand overnight to help as the cleanup goes on.