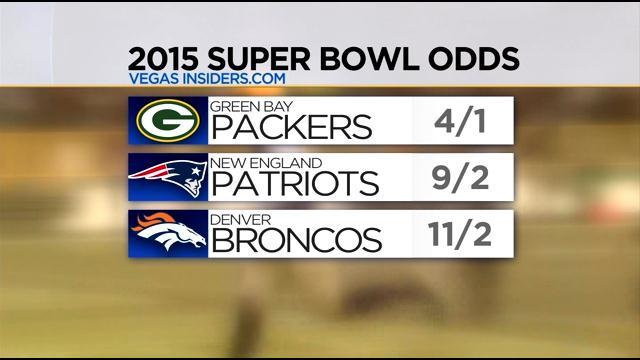 Two blowout wins by the Green Bay Packers have gotten Las Vegas's attention. Sports betting information website VegasInsiders.com has listed the Packers as the favorites, 4-to-1 to win the 2015 Super Bowl. The New England Patriots are next at 9-to-2, followed by the Denver Broncos at 11-to-2.

Sports book bovada.lv has the Packers as co-favorites with New England and Denver. All three teams are listed as 9-to-2 to win Super Bowl XLIX.

Both sites list the Packers as a 2-to-1 favorite to win the NFC Championship.

The team isn't talking like a favorite though. After Sunday's blowout win against the Philadelphia Eagles, quarterback Aaron Rodgers said \"We've got a long way to go, but we're putting ourselves in position to be in the mix.\"

Packers head coach Mike McCarthy agreed with his quarterback, \"We definitely have areas we can improve on,\" McCarthy said.