BARCELONA, Spain (AP) -- ISIS has claimed responsibility for the van attack in Barcelona that officials say killed 13 people and injured many others.

A statement carried by the extremist group's media arm -- the Aamaq news agency -- says Thursday's attack was carried out by "soldiers of the Islamic State."

It says the attack was in response to IS calls for its followers to target countries participating in the coalition trying to drive the extremist group from Syria and Iraq.

The statement provided no further details about the attackers.

(CNN) -- The Catalan government's minister of the interior, Joaquim Forn, says 13 people have died and more than 50 have been injured.

BARCELONA, Spain (AP)  -- A government official in Barcelona says one person has been confirmed dead and 32 others injured in the van attack in the city's historic Las Ramblas district.

Media in Barcelona are reporting that up to 13 died in the attack.

Barcelona police said on Twitter that 10 of the 32 people injured were seriously hurt.

A van mounted a sidewalk in the popular tourist area of Las Ramblas, slamming into a crowd of pedestrians on Thursday afternoon.

UPDATE: BARCELONA, Spain (AP) -- Police in Spain have confirmed they are investigating the van incident in Barcelona as a terror attack, while local media reports say that up to 13 people have been killed.

A van slammed into pedestrians on Thursday in Barcelona's historic Las Ramblas district, which is normally packed at the height of the summer tourist season.

Media outlets, including Cadena SER radio station and TV3, are reporting up to 13 dead. Other reports had varying death tolls.
An official death toll has not been issued.
----

In a photograph shown by public broadcaster RTVE, three people were lying on the ground in the street Thursday afternoon and were apparently being helped by police and others.

At this time, the extent of the victims' injuries remains unclear.

Reuters reports Catalan Emergency Services have asked authorities to close train stations in the area close to the crash site in the area. 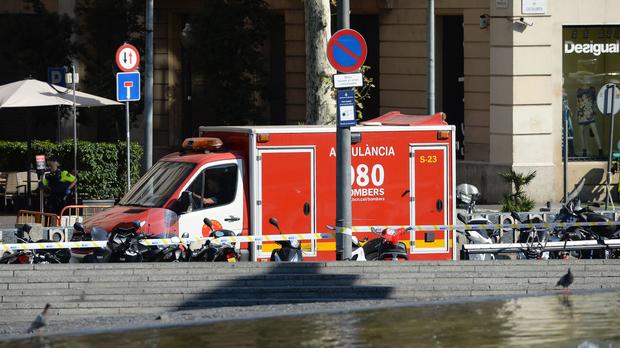 Las Ramblas, a street of stalls and shops that cuts through the center of Barcelona, is one of the city's top tourist destinations. People walk down a wide, pedestrianized path in the center of the street, but cars can travel on either side.

Authorities are asking people not to go near the area.