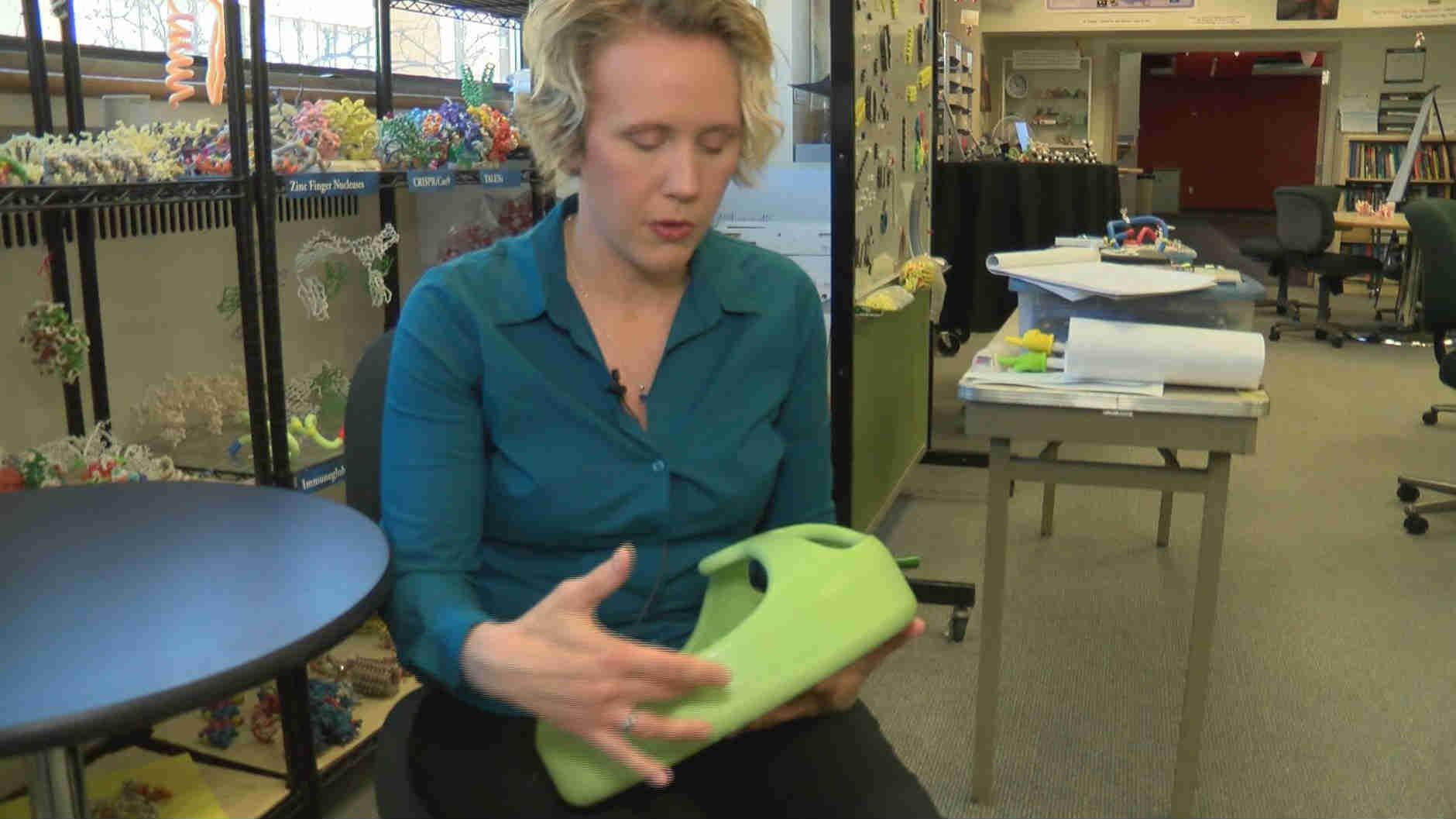 It might not look like it yet -- small, green and still a prototype, but Jennifer Doering holds in her hands something that could soon save children's lives.

\"What it's going to provide is 360 degrees of protection,\" Doering said.

The device, which is just a half-size model right now, is fittingly called the \"Sleep Guardian 360.\" It's a cradle, of sorts, designed to protect infants who share a bed with their parents.

\"Over 600 babies are still dying every year of sleep-related death,\" Doering said. \"Those deaths are preventable.\"

Doering works as an associate professor of nursing at UW-Milwaukee, researching infant death rates in a city that faces significant challenges. Preliminary health department reports show 84 babies died before they reached their first birthday last year. One of the top three contributors to those deaths is an unsafe sleep environment, like co-sleeping.

\"Our current strategies of primarily focusing on public health messaging and changing parent behavior is insufficient to eliminate those deaths,\" Doering said.

So, Jennifer decided to do more. CBS-58 first met her in February 2014, when she was working with her co-creator to imagine the Sleep Guardian 360. Relying on tens of thousands of dollars in grant funding, Doering conducted dozens of interviews with parents in Milwaukee and across the country.

\"I get to step back and say, 'I'm a researcher here, I'm not here to judge,'\" Doering said of her interview process.

What came out of those interviews was a realization that some parents will never be convinced to not co-sleep, despite the recommendations of the health department and experts like Doering herself.

Instead, years of design produced three \"Sleep Guardian\" models: a premium brand with built-in electronic monitoring and blanket sensors, a traditional brand made of plastic and covered in fabric and a simpler model designed for disaster relief scenarios.

\"What's in [co-creator Greg Krzecki's] head and what's in my head is this really elegant, beautiful, sleek design,\" Doering said.

But actually making that physical model to test and experiment with isn't cheap, which is where Vito Gervasi's rapid prototyping center at the Milwaukee School of Engineering comes in.

Doering and Gervasi first teamed up about a year ago, working to create a computerized rendering of the Sleep Guardian, then printed the half-sized model in just 17 hours.

\"As soon as the part comes out of the machine and you dust it off, you clean it off and start looking at it, you see ways you can smooth an area or add a feature to it,\" Gervasi said.

\"He presents me something, I tweak it, we talk about it, it's very collaborative,\" Doering said.

Those discussions have led to changes for the better, including strengthening the protective arm designed to resist a parent's body-weight. It's an unexpected role Gervasi takes seriously.

\"When an infant is lost, there's like a shock-wave in a family that's felt even in the communities so being able to stop that from happening, the benefit of that is... You can't measure it,\" Gervasi said.

But the 3D rendering is just that -- a model that puts Doering and Krzecki's \"Guardian\" one step closer to market -- which means applying for more grants, printing more models and, hopefully, starting sales next year.

It's a goal Doering stresses doesn't end her efforts to save children's lives.

\"Somebody will look at this and see my approach, with my co-inventor using aviation safety principles, and say, 'oh, we can do this a different way,\" Doering said. \"That's a great idea but I can do that better.' That's what I hope.\"

Doering says the next step will come after the announcement of the latest UW-Extension idea advance seed grant. The $100,000 grant would allow Doering to \"de-risk the current business model and write a business plan.\"

The grant provides $50,000 up front and requires a $50,000 match -- money Doering says she'd generate through a Kickstarter campaign.

The grant is announced June 1.

The City of Milwaukee Health Department says it applauds anyone looking for ways to prevent sleep-related infant deaths.  But officials there stress the safest way for a baby to sleep is following the \"ABC's\": alone, on its back in a crib with no bumper pads, quilts, blankets, pillows or stuffed animals, and in a smoke-free home.