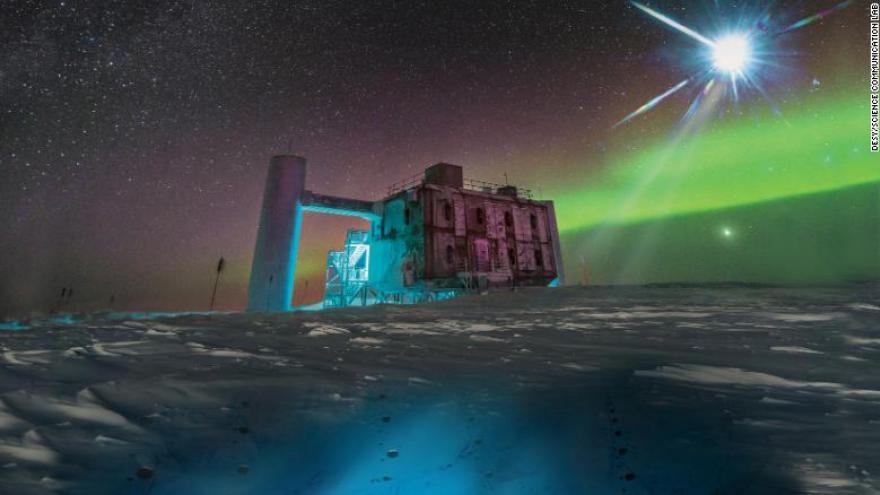 (CNN) -- For the first time, scientists have been able to trace the origins of a ghostly subatomic particle that traveled 3.7 billion light-years to Earth. The tiny, high-energy cosmic particle is called a neutrino, and it was found by sensors deep in the Antarctic ice in the IceCube detector.

Scientists and observatories around the world were able to trace the neutrino to a galaxy with a supermassive, rapidly spinning black hole at its center, known as a blazar. The galaxy sits to the left of Orion's shoulder in his constellation and is about 4 billion light-years from Earth.

Scientists say the discovery heralds a new era of space research, allowing the use of these particles to study and observe the universe in an unprecedented way. And the finding suggests that scientists will be able to track the origin of mysterious cosmic rays for the first time.

"This identification launches the new field of high-energy neutrino astronomy, which we expect will yield exciting breakthroughs in our understanding of the universe and fundamental physics, including how and where these ultra-high-energy particles are produced," Doug Cowen, a founding member of the IceCube collaboration and Penn State University professor of physics and astronomy and astrophysics, said in a statement. "For 20 years, one of our dreams as a collaboration was to identify the sources of high-energy cosmic neutrinos, and it looks like we've finally done it!"

The findings were published in two studies in the journal Science on Thursday. One study includes the detection of the neutrino, and the follow-up study determined that this blazar had produced neutrinos in multiple bursts before in 2014 and 2015.

A combination of observations and data across the electromagnetic spectrum, provided by observatories on Earth and in space, makes this a prime example of how "multimessenger" astronomy is helping make discoveries possible. Multimessenger astronomy also contributed to the discovery of the neutron star collisionthat created light, gravitational waves and gold in October.

"The era of multimessenger astrophysics is here," US National Science Foundation Director France Córdova said in a statement. "Each messenger -- from electromagnetic radiation, gravitational waves and now neutrinos -- gives us a more complete understanding of the universe, and important new insights into the most powerful objects and events in the sky. Such breakthroughs are only possible through a long-term commitment to fundamental research and investment in superb research facilities."

What are neutrinos, cosmic rays and blazars?

Neutrinos are referred to as ghostly because they are extremely volatile, or vaporous, particles that can pass through any kind of matter without changing. They have almost no mass. They can travel through the most extreme environments, like stars, planets and entire galaxies, and remain the same. Before the new studies, only two sources had been found: the sun and a supernova.

Cosmic rays, the most highly energetic particles in the universe, bombard Earth from space. Their ionizing particles in our atmosphere were detected for the first time more than a hundred years ago, in 1912, by physicist Victor Hess. He determined that they came from space.

Cosmic rays are mostly made up of protons or atomic nuclei, and they're launched across the universe because whatever produces them is such a powerful particle accelerator that it dwarfs the capabilities of the Large Hadron Collider near Geneva, Switzerland.

But these rays have puzzled scientists ever since their discovery. Where do they come from, and what creates and launches them?

Neutrinos can help answer that question, because they carry unique information about where they were created.

The unique signature of a blazar is a giant elliptical galaxy with two jets emitting light and particles, moving close to the speed of light along the axis of the black hole's rotation. They can flare for minutes or months. One of those blazingly bright jets -- hence the name blazar -- is pointing at Earth.

"What's special is, we are in the beam. It is pointing at us," Albrecht Karle, a study co-author, senior IceCube scientist and University of Wisconsin-Madison physics professor, said in a statement.

Scientists have thought for some time that energetic particles could be created by these jets because they could act as "cosmic accelerators," affecting protons and neutrons and turning them into cosmic rays. Because cosmic rays have energies up to a hundred million times those of the particles in the Large Hadron Collider, only something spectacularly violent could create them, scientists speculated.

Then, after interacting with other material in the jet, high-energy photons and neutrinos could be created from those cosmic rays.

Since cosmic rays are charged particles, it's impossible to trace their paths to their origin, because magnetic fields affect and alter their paths. But neutrinos, while highly energetic, have no charge. Not even the most powerful magnetic field can affect them.

But scientists needed to be able to trace neutrinos in the first place, something that had never been done before. That's where IceCube comes in.

The IceCube detector became operational at the South Pole in 2010. Largely funded by the National Science Foundation, as well as contributions from around the world, IceCube was built to detect high-energy neutrinos. It is the largest detector of its kind.

To build it, workers drilled 86 holes in the ice, each 1½ miles deep, and spread a network of 5,160 light sensors over a grid of 1 cubic kilometer. It's operated by a team based at the University of Madison-Wisconsin, but the IceCube collaboration itself includes 300 scientists and 49 institutions.

In 2013, IceCube discovered the first neutrinos with higher energy from beyond our galaxy. Since then, it has observed 82 high-energy neutrinos but wasn't able to trace them.

IceCube monitors the sky and detects about 200 neutrinos per day, but most are low-energy, created when cosmic rays interact with Earth's atmosphere.

On September 22, that changed when the neutrino dubbed IceCube-170922A was detected beneath the Antarctic ice cap. It had an energy of 300 trillion electron volts.

When a neutrino interacts with the nucleus of an atom, it creates a secondary charged particle, producing a cone of blue light that can be detected and mapped by IceCube's light sensor grid and traced back to its source.

When the detection was made, IceCube's real-time alert system was automatically triggered. This allowed detections from 18 observatories on Earth and in space to collect data about the neutrino's source across the entire electromagnetic spectrum: high-energy gamma rays, X-rays, visible light and radio waves.

The detections identified the blazar, known as TXS 0506+056, as the source. Before this study, it had been known but not studied in great detail. Gamma-ray observations showed it to be one of the most luminous objects in the universe.

"What we've found is not only the first evidence of a neutrino source, but also evidence that this galaxy is a cosmic ray accelerator," Gary Hill, a study co-author, associate professor at the University of Adelaide's School of Physical Sciences and member of the IceCube collaboration, said in a statement. "I have been working in this field for almost 30 years and to find an actual neutrino source is an incredibly exciting moment. Now that we've identified a real source, we'll be able to focus in on other objects like this one, to understand more about these extreme events billions of years ago which set these particles racing towards our planet."

"Our work conclusively shows that the radiation profile of TXS 0506+056 perfectly matches the energies of the neutrinos, so that we can exclude all other sources," said Paolo Padovani, a multiwavelength astronomer and blazar expert from the European Southern Observatory.

Researchers were also able to detect a flare of gamma-rays with high energy from the blazar. MAGIC revealed that the radiation from the blazar reached energies of at least 400 gigaelectronvolts.

"The results confirm that besides the neutrino, a part of the gamma-rays are produced by high-energy protons -- and not by other particle interactions in the jet. This is the very first time we can confirm that both neutrinos and gamma rays stem from proton parents," Razmik Mirzoyan, MAGIC Collaboration spokesman and scientist at the Max Planck Institute for Physics, said in a statement. "Gamma radiation provides information on how the 'power plants' in supermassive black holes work."

This discovery reveals a new way of studying the universe because neutrinos offer a different way of viewing it.

"This is the first evidence that we have of an active galaxy emitting neutrinos, which means we may soon start observing the universe using neutrinos to learn more about these objects in ways that would be impossible with light alone," Marcos Santander, study co-author and University of Alabama assistant professor of physics and astronomy, said in a statement.

"All of astronomy is light. You see a star because photons -- which is light -- hits your eyes," said Naoko Kurahashi Neilson, assistant professor at Drexel University's College of Arts and Sciences. "If I shine a light on a table, you won't see the light on both sides But with a neutrino flashlight, it will go through and you can see it on both sides."

Other neutrino detectors will also enable the possibility of more detections to study them, and their origins, in greater detail.

At the end of June, neutrino physicist and IceCube scientist Elisa Resconi's Technical University of Munich team launched two 492-foot strings with eight detectors on them 1.7 miles beneath the surface of the northeastern Pacific Ocean to the sea floor.

"If the characterization of the site proves to be excellent, one could consider how a full-scale neutrino observatory might be deployed on a relatively fast timescale thanks to the existing deep-water infrastructure," Resconi, who also participated in the study, said in a statement. "A neutrino detector array operated in the Pacific would ideally complement IceCube and its second generation at the South Pole Station."

Her goal is to establish a network of neutrino telescopes across the Earth, and she's working on the design for it now.

"We now have a better understanding of what we should be looking for. This means that we can in future track down such sources more specifically," Resconi said.

And more detections could reveal new sources of neutrinos in the future.

"We continue to search for counterparts to neutrino detections, to understand whether all such events come from blazars like this one, or whether there is a diversity of celestial objects can produce such highly energetic neutrinos," said Phil Evans, development scientist for the Neil Gehrels Swift Observatory.