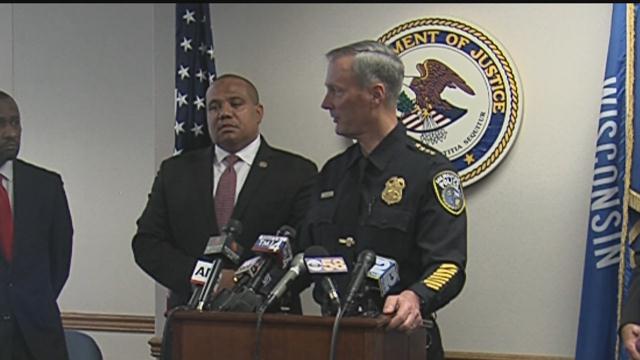 The U.S. Department of Justice released new details on the review of the Milwaukee police force.

"The good thing about collaborative reform is you can in fact have those discussions. I mean, I am not an unknown quantity, having been a police chief for almost 30 years. I have a track record," said Milwaukee Police Chief Flynn.

Chief Flynn asked for help from the Department of Justice about a month ago. The DOJ answered. They will help the Milwaukee Police Department with a process called "Collaborative Reform."

A branch of the Department of Justice called the office of Community Oriented Policing Services, or COPS is in charge of the collaborative reform.

There's two main ways the DOJ can look into a police department. One is called a “pattern and practice” investigation. That uses legislative reform or DOJ representatives likened it to suing their way into change.

"I think if it came to a technical recommendation that was not an essential component of being legitimate or effective or fair and unbiased -- that's a discussion you can have and I know those discussions have occurred at other agencies," said Flynn.

The Coalition for Justice is not happy this process could be considered optional.

The process involves eight to ten months spent with the Milwaukee police. That is the investigation... after the investigation, recommendations will be given. COPS will monitor Milwaukee Police for 6 months and keep track of whether the recommendations have been put into effect. Six months after that, almost two years into the process, COPS will publish their final report.

“This is extremely deep. This is the same kind of pulling back of the layers of an organization as any investigation we would do in the Department of Justice. We will look at thousands of pages of documents, use of force, go on ride alongs, we'll do interviews. Basically, the best way to provide assistance is to know what's going on in the department,” said Ronald Davis the Director of COPS.

At a briefing held for the media on Thursday, Mayor Tom Barrett and Chief Ed Flynn say they want to change, and have asked for the help. They both compared the collaborative reform to a house guest. They say they’re invited the DOJ in for eight months, to look over every “nook and cranny.”

“The chief's letter identified some of those issues -- not all of them -- use of force training, I think there was issues with regards to handling mass demonstrations, and community engagement, but part of the process right now, why I didn't announce the scope today, is it would be incomplete until we talk to the community as well,” said Davis.

Davis also stressed the public is just as good as a judge. Hamilton said Thursday the family of Dontre and the family’s attorney would meet with DOJ and COPS officials. Hamilton said the Coalition for Justice is demanding an investigation, not collaboration. He said they are skeptical, but hope the reform process works.

"They have to back up what they're talking about, and if they're here then let's get something done," said Hamilton.