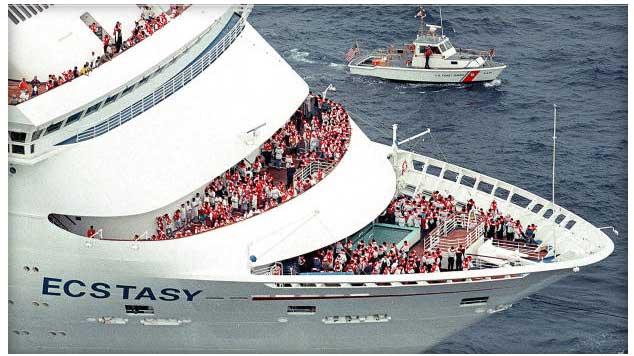 MIAMI (CBS NEWS) -- A search is underway in the Bahamas for a woman who apparently jumped overboard from a cruise ship.

Carnival Cruise Line said in a statement to CBS News the 32-year-old woman “was witnessed jumping overboard” early Wednesday while the Carnival Ecstasy was approximately 15 miles off the coast of the island of Grand Bahama.

The U.S. Coast Guard says it has dispatched aircraft and two ships to an area about 27 miles southwest of the island to look for the woman. A Coast Guard statement says the woman was seen falling before dawn Wednesday from the 11th deck of the ship.

The cruise ship had left Nassau, Bahamas, and was en route to Charleston, South Carolina, at the time.

The woman’s name and hometown were not released.

The cruise line said the Coast Guard released the ship to resume traveling to Charleston at 9 a.m.

“The company’s CareTeam is providing assistance and support to the missing guest’s family on board and our thoughts and prayers are with her and family and loved ones during this difficult time,” the statement said.