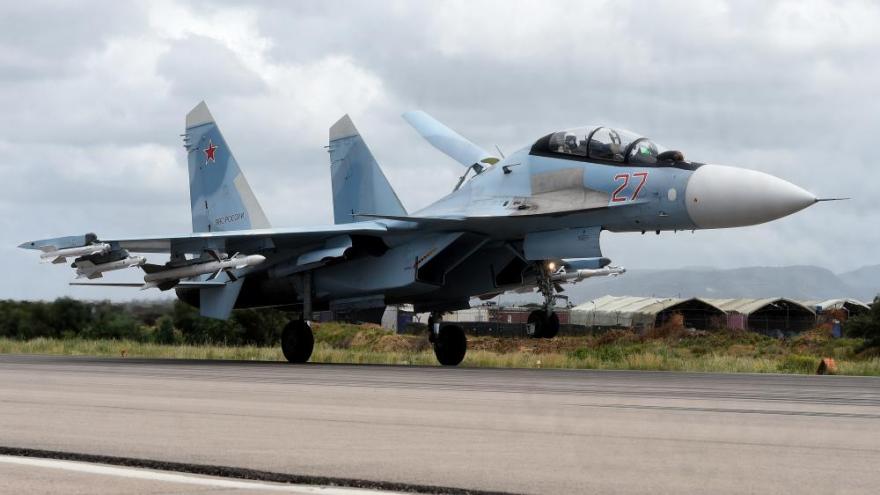 The United States accuses Russia of putting U.S. pilots at risk during an aerial encounter.

(CNN) -- The US military accused a Russian fighter jet of putting the crew of a US Navy surveillance plane at risk while performing a high-speed inverted maneuver in front of the US aircraft during an "unsafe" intercept Wednesday over the Mediterranean Sea.

The US military's Space Command also said that Moscow conducted a test of an anti-satellite missile Wednesday.

The US Navy said a Russian Su-35 jet performed an "unsafe" intercept of the US P-8 surveillance aircraft Wednesday while it was flying in international airspace over the Mediterranean Sea.

"The interaction was determined to be unsafe due to the Su-35 conducting a high-speed, inverted maneuver, 25 feet directly in front of the mission aircraft, which put our pilots and crew at risk," the US Navy's Sixth Fleet said in a statement.

"The crew of the P-8A reported wake turbulence following the interaction. The duration of the intercept was approximately 42 minutes," the statement said, adding that "this interaction was irresponsible."

The US has in the past accused Russia of similar such unsafe intercepts of US surveillance aircraft, including over the Mediterranean Sea, but there has been a relative decline in recent years.

Russia also conducted a test of an anti-satellite missile Wednesday according to the US military's Space Command.

"US Space Command is aware and tracking Russia's direct-ascent anti-satellite (DA-ASAT) missile test April 15," the command said in a statement.

Gen. John W. "Jay" Raymond, the commander of Space Command and the US Space Force's chief of space operations, said the Russian test "provides yet another example that the threats to US and allied space systems are real, serious and growing."

Russian and Chinese anti-satellite weapons were cited as one of the reasons why the US needed a military branch focused on space, prompting the creation of the Space Force which Raymond now leads.

US satellites play a critical role in everything from navigation, weapons targeting and intelligence gathering, including keeping tabs on North Korea's nuclear weapons program and monitoring Russian and Chinese military activity, and there is concern about Beijing and Moscow's growing ability to target satellites.

Space Command said the latest Russian test comes on the "heels of Russia's on-orbit testing the US highlighted in February, namely COSMOS 2542 and COSMOS 2543."

The statement said that those satellites, "which behaved similar to previous Russian satellites that exhibited characteristics of a space weapon, conducted maneuvers near a US Government satellite that would be interpreted as irresponsible and potentially threatening in any other domain."

Yet despite those mounting tensions the US and Russia have been able to collaborate on space issues with a NASA astronaut joining two Russian cosmonauts on a mission to the International Space Station earlier this month.