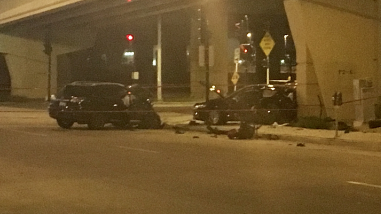 Police told CBS 58 Sunday that they had a good idea who they were looking for. A day later, the 23-year-old suspect turned himself in, but police still haven't released his name.

In Medical Examiner documents released today, CBS 58 learned the uber driver was bringing the women to the Journeyman Hotel when the accident happened.

All three were living in Chicago, but one woman grew up in Menomonee Falls and leaves behind a grieving family in Wisconsin.

Thirty-five-year-old Ashley Sawatzke was from Menomonee Falls. Her family still lives in the area.

According to documents released from the medical examiner during the accident, a Menomonee Falls dispatcher told police her friend Ashley may be a victim in the accident.

The other two women, Amy Taylor and Lindsey Cohen are originally from Ohio.

Sawatzke recently took a job at Leo Burnett, but the three had worked together at BBDO.

The agency put out this statement today:

"We are absolutely devastated by the loss of these three incredible, exuberant young women who were taken from us far too soon. Our thoughts and prayers are with their families and loved ones at this tragic moment."

"She was my neighbor. First floor. We'd bump into each other after work," said Reggie Snead.

A neighbor of Amy Taylor is also shocked. He said they looked out for each other, and will miss that they'll never have another friendly conversation. Snead sends this message to those involved.

"It's a sad situation, she was really a nice girl... for somebody to do something like that and run is beyond cowardice," said Snead.

An autopsy was conducted today. All women were rear passengers, and were not wearing seatbelts. The medical examiner ruled all three deaths were an accident.

MPD is still seeking the driver and passenger of the striking vehicle.

That vehicle was not reported as stolen.

The Milwaukee Police Department is investigating a triple accident that occurred shortly before 3 a.m. in the 200 block of W. Clybourn Avenue.

A third female also believed to be in her 30's, died from her injuries at a local hospital. She has yet to be identified.

The investigation into this accident and the occupants of the Lexus is ongoing.