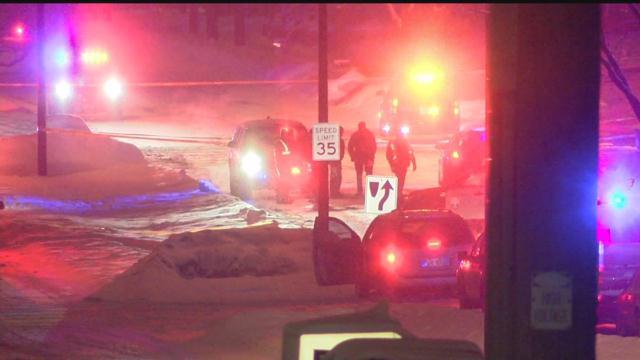 The Milwaukee Police Department has taken over an investigation involving two Wauwatosa Police officers firing their weapons. Witnesses say they saw Wauwatosa Police trying to get a male suspect into custody after police were called to a home for a domestic fight with a woman.

Police say they were called to Normandy Village Apartments after neighbors say they heard a woman screaming upstairs. Police say after they got there the desperate 32-year-old female victim jumped off her balcony, was unconscious, and died at the scene.

We spoke with people close to the female victim and they say she was killed by  the suspect who is her live-in boyfriend. They say he recently moved to the area. They call her a career woman who graduated with a bachelors and a masters degree.

Police say one of three officers at the scene found the 34-year-old male suspect walking away and chased after him, when they say he pulled out a kitchen knife and started attacking a 50-year-old patrol supervisor. The officers fired at the suspect and he was hit twice and transferred to Froedert Hospital.

We spoke with a witness who saw the whole thing unfold.

Jason Carter says he saw it all from his window, "One guy was being chased by another and then there was a scuffle outside the window. It was clearly the police and there were a bunch of them trying to take him down. I saw one cop draw his gun and shoot at the ground."

The officer was released with minor injuries, and the suspect is still in the hospital. Tune into CBS 58 News, Sarah Barwacz investigates the details behind this case on our evening newscasts.